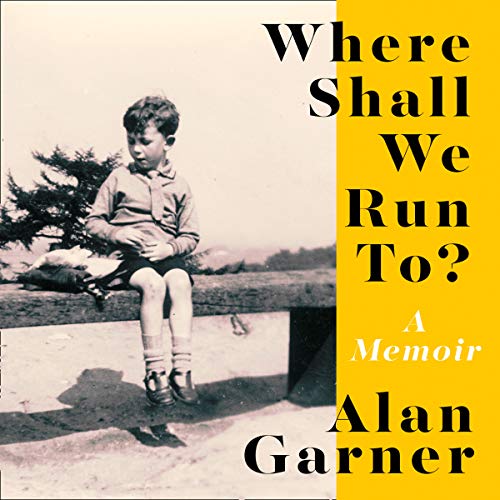 Where Shall We Run To?

By: Alan Garner
Narrated by: Robert Powell
Try for £0.00

From one of our greatest living writers comes a remarkable memoir of a forgotten England.

'The war went. We sang in the playground, "Bikini lagoon, an atom bomb’s boom, and two big explosions". David’s father came back from Burma and didn’t eat rice. Twiggy taught by reciting “The Pied Piper of Hamelin”, “The Charge of the Light Brigade” and the 13 times table. Twiggy was fat and short and he shouted, and his neck was as wide as his head. He was a bully, though he didn’t take any notice of me.’

In Where Shall We Run To?, Alan Garner remembers his early childhood in the Cheshire village of Alderley Edge: life at the village school as ‘a sissy and a mardy-arse'; pushing his friend Harold into a clump of nettles to test the truth of dock leaves; his father joining the army to guard the family against Hitler; the coming of the Yanks, with their comics and sweets and chewing gum. From one of our greatest living writers, it is a remarkable and evocative memoir of a vanished England.

"Alan Garner is indisputably the great originator, the most important British writer of fantasy since Tolkien, and in many respects better than Tolkien, because his work is deeper and more truthful...I salute him with the most heartfelt respect and admiration." (Philip Pullman)

"He deploys short, accurate words better than anyone else writing in English today, and he makes it look simple." (The Times)

What listeners say about Where Shall We Run To?

As I love Alan Garner's amazing books, having read them as a child and rediscovering them recently... I thought it would be nice to hear about his childhood. Hearing about the things that influenced and shaped his life and ultimately his amazing stories!
It didn't disappoint. I found it fascinating and charming, especially when referring to his escapades with friends, the school teachers who influenced him, the bullies he and his pals tried to avoid and the evacuees with their shaved heads patched with gentian violet! The wonderful family characters, some who had obviously lived in the area for generations and had literally helped shape the landscape... must've given him an absolute wealth of descriptions to work on! Best of all...for me.. is where he describes the area , mentioning places where he spent his childhood and where my favourite book is set! Lovely account of a childhood from times gone by.

Very much enjoyed a walk in the
Past.beautifully written, wonderfully read
Would definitely recommend a read of listen