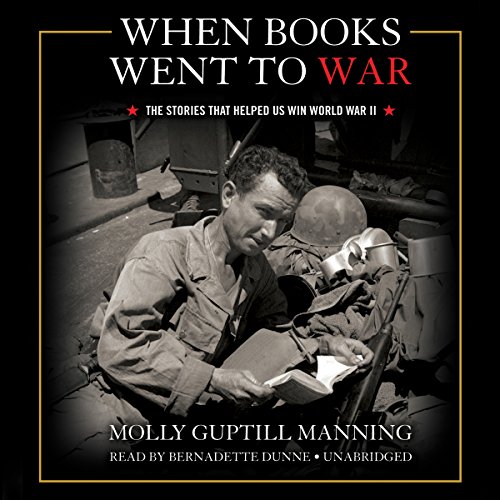 When Books Went to War

When Books Went to War

When America entered World War II in 1941, we faced an enemy that had banned and burned over 100 million books and caused fearful citizens to hide or destroy many more. Outraged librarians launched a campaign to send free books to American troops and gathered 20 million hardcover donations. In 1943, the War Department and the publishing industry stepped in with an extraordinary program: 120 million small, lightweight paperbacks for troops to carry in their pockets and their rucksacks in every theater of war.

Comprising 1,200 different titles of every imaginable type, these paperbacks were beloved by the troops and are still fondly remembered today. Soldiers read them while waiting to land at Normandy, in hellish trenches in the midst of battles in the Pacific, in field hospitals, and on long bombing flights. They wrote to the authors, many of whom responded to every letter. They helped rescue The Great Gatsby from obscurity. They made Betty Smith, author of A Tree Grows in Brooklyn, into a national icon. When Books Went to War is an inspiring story for history buffs and book lovers alike.

This book was absolutely inspirational and incredibly informative. I am delighted at how much I learned and enjoyed my experience. I came away with so many more books to read. But, I have a renewed appreciation for books, and for our librarians who helped campaign for books for our service members. I was impressed with the difference it made for the individual soldiers and their lives following combat. (Also thanks to the G.I. Bill) Books gave the service members the courage and confidence to go to the University following the war. I loved that they shared with the English soldiers who weren’t as book wealthy as our American boys. Added insights I learned about the war were especially important to me as well. I have an interest in learning about the world wars. Finally, the censorship battle that ensued within our own country was as frustrating to learn about as interesting. Learning this strengthened my resolve to keep reading and encouraging all within my sphere of influence to read.
The last line in the book was absolutely perfect. Our troops were given more books than the Nazi’s burned. How’s that for the war on ideas?

My husband and I found this to be a fascinating and, to us, previously unknown chapter of WWII history. Sincere thanks to Molly Manning for her excellent work. We have visited many a WWII museum and yet knew nothing of this, and have never seen an ASE on display. Would love to see this story told by a skilled cinematographer like Ken Burns.

Well researched! I had no idea how this genius idea was brought to fruition first by librarians, then funded by the military and facilitated by a coalition of publishers. It did so much more than combat book burning. It created a generation of readers of quality works, mass produced and portable, that later went on to college under the new GI bill.

I have read a lot of WWII history books, but this one provides a fresh perspective regarding the role books played in the war (on both sides). I loved the excerpts from actual letters and learning about what books were the most popular with the troops. The various political machinations that were going on at the time were quite interesting as well. Really good book for those who like book and/or WWII history.

The narrator did a great job- clear, easy to understand, easy to listen to, but not boring.

Very interesting info . . . But too dryly presented and read. I made myself read to the halfway point.

What did you love best about When Books Went to War?

Not put in boring tearms

What does Bernadette Dunne bring to the story that you wouldn’t experience if you just read the book?

This book was done in a way I loved and understed it. Thanks