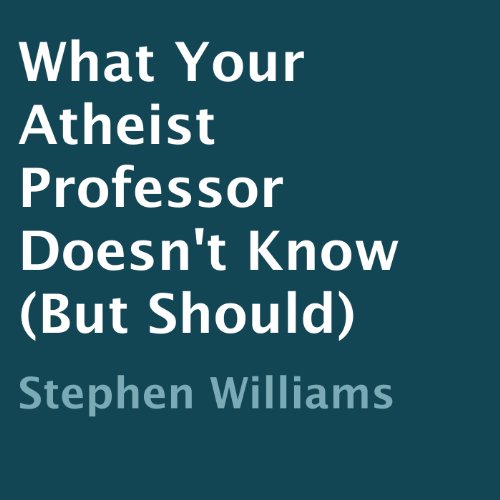 What Your Atheist Professor Doesn't Know (But Should)

By: Stephen Williams
Narrated by: Dan Kassis
Try for £0.00

The information age has begotten turmoil. It seems that the more information we have, the less peace the average person has. To many, an impression has developed that modern science has disproved the existence of the immaterial realm, and doomed us to a sterile, pointless wandering in the wilderness of minutiae. During roughly the same time this impression has been developing in popular culture, however, massive evidence to the contrary has been steadily erupting from The Sciences! Now that literally billions of trillions of layers of mathematical impossibility have been exposed for the Materialist worldview, compounded by insurmountable metaphysical hurdles, atheism has been shown to be completely irrational!

A reasonably skeptical look at modern philosophy, science, archaeology and history point overwhelmingly in a single direction, and the truth that it points to is blissful and eternal. If you'd like to see some of the evidence that has been causing a resurgence of Theism in academic philosophy departments recently, read this book!

Better suited for reading than listening

Great content but better suited for reading than listening. There were many long lists and referenced diagrams which got a bit annoying in verbal form. Intend to read the book so I can get the full value from it.

difficult for an atheist to digest

This book shows that theism in general and Christianity particular are the only rational explanations for why the universe and life exist. Any thinking person would have a hard time being an atheist after reading this book.

Although I do not agree with some of theories about space, and galaxies discussed, i feel confident there is enough evidence for intelligent design

A plethora of evidence to silence atheists.

Well worth the time, excellent content, powerful arguments, demolishes the fallacious arguments of those who "claim" their views are rooted in science.

Painful for educated on the subject

This book is extremely painful to read for someone with even basic knowledge on these subjects. Some of the points brought up have long been refuted. The positive reviews really threw me - I was hoping for some deep response to the skeptic books I have read. If you are looking for high-quality intellectual thoughts, it's not here.

As an example, the chapter on Intelligent Design is so deluded and tired I thought I was reading a book written in the 1990's. The flagellum again? That's been studied and described now for well over a decade. Transitional fossils don't exist? Hundreds if not thousands of transitions have been found.

I can go on. The Shroud of Turin? Really? Long ago proven a fake. Even the Church has divorced itself from the artifact.

In fairness, for a newcomer to the subject, there does seem to be a quite complete overview of traditional apologist arguments. However, it would be nice if even the most basic responses were provided. For example, regarding the Cosmological Argument, perhaps some discussion on how it is not a theistic argument but a deistic one, how it's consider blasphemy by true believers (it declares Genesis to be false), and how its fundamental premise - no uncaused events occur - is false given quantum dynamic fluctuations. Throughout the book, the most simple and basic responses are either never brought up at all or quickly glossed over.

One general complaint I have is the use of probability. For example, you will hear several times: says the probability of occurring is so low as to be mathematically impossible. Therefore, since occurred, God exists. But...isn't the most logical response to say that perhaps, just perhaps, the math is wrong? If someone says it is mathematically impossible to win the lottery, and then you do win it, I guess you could say there must be a God, but a more level response would be simply to say that the original math was incorrect. No?

I guess if you are a Theist looking for a start, you could try this book. But someone with the most basic understanding of apologetics and skepticism will laugh it away. A waste of money for me, in my opinion.

powerful collection of facts and logic

a wonderfully crafted book. A must read for anyone who is about to start college. Especially a young person endeavoring to study one of the sciences

I can't believe it's over! This is one of the best books I've read on atheism. Fascinating to hear the basic arguments on the topic. I'm looking forward to listening again. This was well worth the time and money! Lots of outside resources are given in the book itself.

some things to think about....

Exceeded expectations... I expected bias, opinion, loose research, but I was surprised to find the opposite. Certainly there is a philosophical message, but the author implores the reader to seek the truth for themselves.

The is the most complete argument for the existence of God I have found yet.

Always listen to the sample

More nonsense apologetics's. Totally not what I expected this to be . Nothing but assertions. Ridiculous!