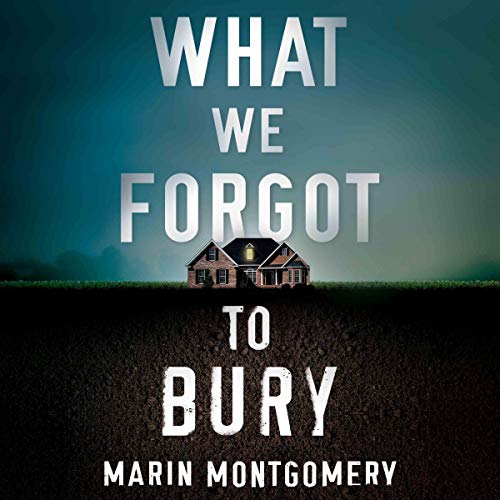 What We Forgot to Bury

By: Marin Montgomery
Narrated by: Samara Naeymi,Jess Nahikian
Try for £0.00

Truth and deceit blur as one woman’s desperation twists into another’s desire for revenge in this mind-bending psychological novel.

Charlotte Coburn has a tragically dark past. But she’s safe now. She lives in a gated community, protected from danger. When teenager Elle knocks at her door looking for shelter during a particularly severe storm, the woman can’t help but think how lucky Elle’s been to have found someone as friendly as her. Except Elle chose her door on purpose...

She knows all about Charlotte’s secrets because they ruined her family and her life. And it is time that everyone else knew. But Charlotte’s past has left a dark void in her life, so she is concocting her own vicious plan, convinced that Elle can help fill that void.

As events unfold, the truth unravels and pulls both women into a dangerous game that will leave you wondering, Who’s the villain?

“In this gripping psychological thriller...The explosive finale will leave the reader devastated. Fans of Megan Abbott will want to check out this one.” (Publishers Weekly)

What listeners say about What We Forgot to Bury

I feel that I am very picky when it comes to my thrillers. The book better have a great twist, good character development, and tie up all loose ends. And to enjoy it in audio form, I have to love the narrator. This book hit all of my “have-tos!” I loved it! And I really thought I knew what was going on until BOOM! That twist started a slow reveal. So I rethought and definitely knew how it would end. Nope! BOOM! Got me again. Great story. Excellent performance by the narrator. My only reason for 4 stars instead of 5 is because I felt the ending was a far reach. Almost like the author needed one last surprise and threw a character under the bus to make it happen. But that’s my opinion and doesn’t take away from the rest of the story. It’s definitely worth a credit!!

I was invested. In fact, I avoided some of my planned activities to listen to this-What -started-out-as-a-good-read-turned-into-WTF-is-this-crap-Im-hearing?!?
I .Could.Not.Go.Past 51.
To those who could've, but didnt stop this derailment and especially to those who chose to watch it burn after the crash, thanks for nothing.

A great story very well performed the ending however was a bit much a little too theatrical.

loved it twisted and turned, really kept you guessing! Ending was a total surprise. Awesome.

Keeps you on your toes till the end.

Extremely good plot. Many twist and turns, fast paced, not
bogged down by long descriptions.

This book kept me on my toes! At the beginning I thought it was going to be somewhat banal and some parts of it seemed unrealistic, but everything was tied up nicely and made sense later on. If you enjoy psychological mystery/suspense novels then def give this one a go!

I am picky and this was AMAZING all the way from start to finish!

Slow boil that peters out toawful

If audible would let me exchange, I would. But they won’t without begging. So much for their exchange promise.

What we forgot to bury

OMG! This book was........OMG! The twists and turns this story took had me up all night listening and I didn’t sleep at all. WOW. I highly recommend