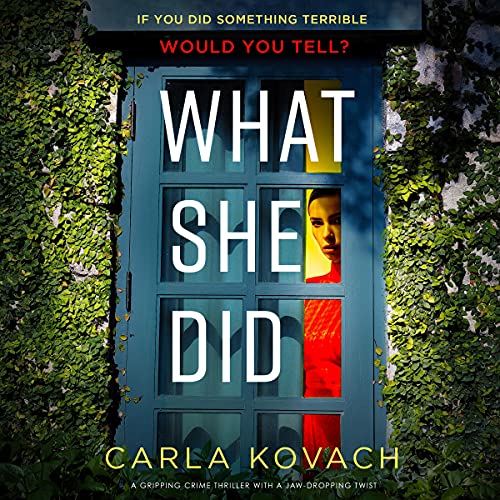 By: Carla Kovach
Narrated by: Imogen Church
Try for £0.00

Marissa lives alone in her tiny one-bed apartment. It’s quiet and safe; all she’s ever wanted since the night her mother was killed in front of her. But when the police knock on her door with the news that her last remaining family member has been murdered, she comes face-to-face with the trauma she has spent a lifetime running from.

A witness saw her car outside his house that day, but Marissa knows she’s innocent. She hasn’t seen her uncle in years and remembers going to bed in her own home that night. But she’s had blackouts before and can’t always trust her memory.

Days later, Marissa’s neighbor is found dead in his home with stab wounds all over his body, exactly like her uncle. It was no secret that Marissa didn’t get on with her neighbor, but she’d never want to see him hurt. How can she convince the police that she isn’t a killer? And as the secrets from her past take hold of her present, is there anyone in her small world she can trust?

You’ll think you know where to draw the line between innocence and guilt. But blame is a dangerous thing, and nothing is ever what it seems....

Perfect for fans of C.L. Taylor, Teresa Driscoll, and Lisa Jewell, What She Did is a dark and twisty crime thriller that will keep you up all night!

What listeners say about What She Did

Marissa witnesses a murder as a child and is emotionally disturbed. when a neighbour moves in next door things start to happen , did she murder her neighbour or didnt she. I really dont want to give much away.
Carla Kovak does it again very talented writer from the DI Gina Harte books. Carla's writing leaves you totally gripped that you cant stop listening to until the end. well done

Unfortunately i had to turn off

Im sure this story is great just couldnt stand to listen anymore as narrator's voice.
It was so wooden and felt awkward and annoying
shame as story sounds good.

very very interesting, very sitting on the edge of my seat kind of reading.