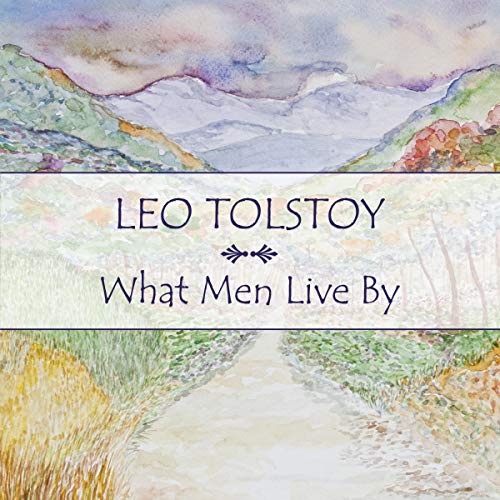 What Men Live By

A heart-opening tale of transformation

One winter evening a shoemaker finds a mysterious stranger naked and freezing by a shrine in his small village. The shoemaker rescues the man, and takes him home. Though the stranger won’t say where he came from, Simon invites him to work beside him, and stay with his family. As the story unfolds, the stranger transforms, and ultimately reveals an astonishing and deeply moving secret.

Late in Tolstoy’s life, after he had written his great masterpieces War and Peace, and Anna Karenina, he underwent a spiritual transformation. Though he was perhaps the most famous figure in Russia at the time, he felt his life was devoid of real meaning. He looked toward religion. But finding a disconnect between the actions of the Church and the teachings of Jesus, he left religion behind, and began to forge a unique spiritual path all his own.

It was during that late period that he gave us a series of short stories, spiritual in nature, several of which are true gems. "What Men Live By" is perhaps the most shining example of these.

This gentle tale is narrated by Max Highstein with sensitivity and warmth. Highstein’s original music score also graces the hour long program, artfully supporting Tolstoy’s brilliant storytelling. This is a special recording you’ll want to sit back and enjoy again and again, and share with your friends and family.

What listeners say about What Men Live By

The literature is classic Tolstoy. He weaves scriptural/spiritual truths in a story.
The narration is unlike I’ve ever heard in all the many audiobooks I’ve heard. The narrator reads slightly above a whisper and there is chimes/music going on in the background. The music is like the music you’d hear getting an oriental massage. Since the book was only an hour I put up with it. Be sure to listen to the sample- you may like it. The story and message far outweighs the narration.

Good to have a chance to read a great Tolstoy's story. It is worth to have time to read hearing.
I really enjoyed this story.

May Leo rests in peace 🙏🏾

Enriching and refreshing, just as a soul craves.. I think no religion nor logic would question that Leo is a pure mystical positivity