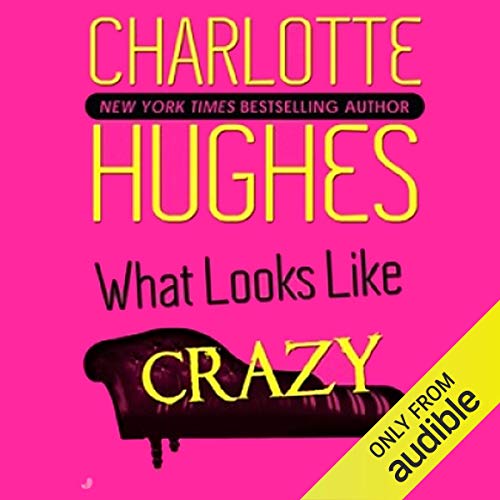 By: Charlotte Hughes
Narrated by: Teri Clark Linden
Try for £0.00

In this first installment of Charlotte Hughes' wildly entertaining series, listeners meet psychologist Kate Holly, who has her hands full of her own personal problems, not to mention those of her wacky patients. Hughes collaborated with Janet Evanovich on their Full House series and she has written nearly 40 books, but What Looks Like Crazy marks the official debut of a humorous and lovable protagonist who will hopefully stick around for a long time.

Teri Clark Linden is an experienced, classically-trained actress who boasts the ability to become each psychologically touched character in Hughes's literary arsenal. She can be strong, sexy, and vulnerable, and she drawls out a thick Southern accent like a native.

She's had hit after hit with Janet Evanovich. Now this New York Times best-selling author begins a series that listeners will go crazy for.

Psychologist Kate Holly's own life has become the stuff of intensive therapy. She's divorcing her gorgeous firefighter husband, she has an eccentric secretary, her mother and aunt have erected a vaguely sexual sculpture in her front yard, and her psychiatrist ex-boyfriend won't stop calling to find out what color panties she's wearing. Now, Kate's being bombarded with mysterious threats, and the only person who can help her is the one man who always makes her lose her mind - and heart.

I think the book would have been good with a different reader. She was terribly monotone.

While this book had many amusing moments and eccentric characters, the main character Dr. Kate was a huge disappointment. In spite of being well educated, Kate had absolutely no common sense or personal boundaries, with the emotional maturity of a teenager.

Truly enjoyable with just the right combination of humor and psych. Easy listening to while learning and laughing.

What made the experience of listening to What Looks Like Crazy the most enjoyable?

I loved the reading!! It was perfect!

Have you listened to any of Teri Clark Linden’s other performances before? How does this one compare?

A twist and turn at every chapter. Just plain fun!

I could listen to this book over and over!! I just love it. Just the right amount of silliness and seriousness. My kind of book. This book is like therapy!

I really enjoyed the first book of this series. The characters are likeable and well developed. The plot was solid and there were a lot of twist and turns to keep the story going. I bought the next two books in the series.

only wish the narrators did not try so hard to sound Southern....especially the Thad narrator.

The main character lets everyone walk all over her and also is pretty timid. The other characters are selfish and entirely unlikeable. I couldn't finish listening to the story.

Bad part is the main character won't go back to her husband because he's a fire chief. otherwise its not bad.

Worse story! Snoozer! I don't like stories that say, he said, she said all the time.