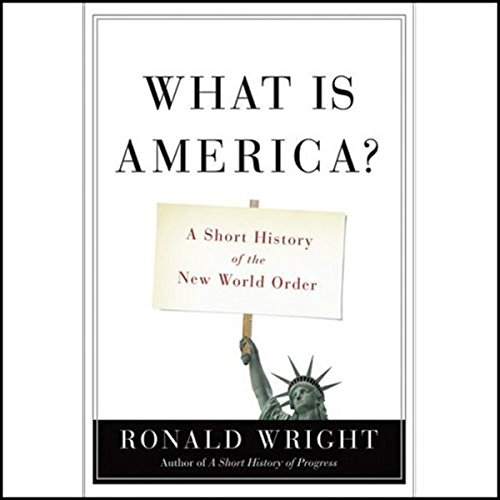 A Short History of the New World Order
By: Ronald Wright
Narrated by: Stefan Rudnicki
Length: 6 hrs and 55 mins
Categories: History, Americas
4.0 out of 5 stars 4.0 (2 ratings)

Following his international best seller, A Short History of Progress, Ronald Wright provokes once again, as he explores the oldest American myth: the endless frontier. In the years since 9/11, many of the archetypes and ideals with which we've traditionally framed the American enterprise now seem endangered, even hollow. This raises the question, has America ever been what it thinks it is? What Is America? goes to the heart of that inquiry.

Ranging with dazzling expertise through anthropology, history, and literature, Wright reconfigures our self-perception, arguing that the "essence" of America can be traced to the foundations of our history - literally to the collision of worlds that began in 1492, as one civilization subsumed another--and exploring how these currents continue to shape our world.

"[Few] will have likely heard so charming an analysis of American depredations...An entertaining, highly tendentious account of where we've been and where we're headed." (Kirkus Reviews)

What listeners say about What Is America

What other book might you compare What Is America to and why?

Diamond's "Guns, Germs, and Steel" is the obvious comparison. However the aims and the focus of the two books are quite different.

Yes. The impact comes from looking at the "big picture" and then contrasting it to the standard American mythology. Go watch Milton Friedman's "What is America?" lecture on Youtube after finishing Wright's book to gain some insight into the importance of the titular question. True American history is subversive! America, as presently constituted, needs selective amnesia in order to function. Its a rather heavy feeling once that realization sinks in.

Where does What Is America rank among all the audiobooks you’ve listened to so far?

Ranks pretty low. The one reason I know our Government is dishonest is it's BS version of history that smears Capitalism. If there is one thing that's good in this world, it is Free-market Capitalism. Both the Dem and GOP party are guilty of not defending it.

What other book might you compare What Is America to and why?

This book can be bad and still useful. It can let you know what the Gov wants to promote.I bought this book and continued shopping and this Authors name appears in a review for : "The Mighty Wurlitzer: How the CIA Played America" From The Washington PostReviewed by Michael KazinWhat do Richard Wright, Gloria Steinem, Henry Kissinger, George Meany, Nina Simone and Arthur Schlesinger Jr. have in common?Answer: Directly or indirectly, they all took money from the Central Intelligence Agency during the early years of the Cold War.

Thank you, Mises Institute for existing! The truth can set you free! Now I can listen to anything without fear. I can pick out useful info from a pile of garbage.

I had a bow movement when he preached about the horrors of Global Warming!

This Author said one thing that's very true. He said it in Reference to Alexis De Tocqueville and he basically said he is not a historian, which means he can be trusted to tell the truth about history. Very true, Mr Wright! That explains the rest of your book! ( I found the truth about history from Austrian economists)