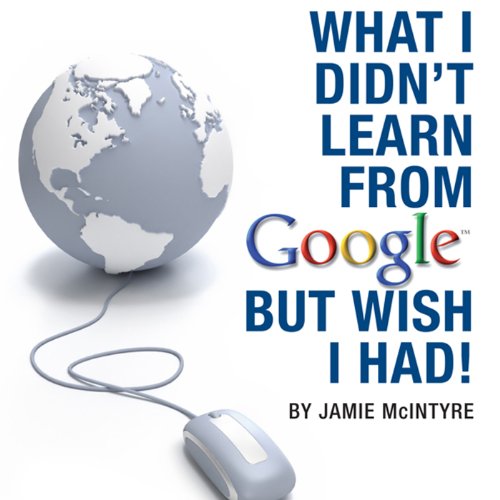 What I Didn't Learn from Google but Wish I Had

By: Jamie McIntyre
Narrated by: Jamie Nesvold
Try for £0.00

If you have ever wanted to start your own Internet business, make money online, or have a new stream of income, or if you are just curious about the Internet phenomenon, then this book is for you. If you are committed to excelling in the 21st century, then an education around how to derive an income from the Internet is a must. It is now very possible for the average person to make a full-time living via the Internet, thanks to the Internet millionaires who have pioneered the way and the success of companies like e-Bay and Google - companies that have allowed many people to make a full-time living working from home.

This book will assist those that want to make $4,000 a month or more online by commencing an Internet career without the need for capital or a computing degree. It also highlights the enormous success of not only Google, but also the power of using Google as a business marketing tool that has made many Internet millionaires in recent years, including the author.

This book's motto is "Google is your friend" when it comes to making money online. The author has learned many things from Google that have been to his business advantage. However, many of the most powerful things about how to use Google to generate significant wealth by driving traffic to websites he learned by modelling Internet millionaires - strategies he wished he had learned from Google but didn't that would have made his Internet success even greater.

A good history of Google

I was disappointed with this book as I thought (from reading the blurb) that it would give me a lot of practical pointers on how to use Google effectively to help my business.
In fact it's a history of Google and internet marketing rather than a useful how-to.
So if you like history and background, great, but if you're looking for a guide, don't be fooled by the blurb.

Obviously the author is a savvy marketer and knew that by using Google's name in his title he could piggyback their success to sell his book.

The author drones on for several chapters with a recounting of the history of the internet. Discussing Moore's law, how Bill Gates got started or burn rates of early dot com bubble companies may be of interest to some but it surely is not what is required or interesting to those who want to "start your own internet business,make money online or have a new stream of income" as the book blurb states.

If you truly want some specifics and not overused generalities on how to profit on the net, look elsewhere.

A waste of time. The content mainly deals with the history of Google, Facebook etc - most of the information is freely available in the public domain! It is irrelevant to making money on the net!!! The publisher's summary omits to mention that it is mainly based on Jamie's experiences in Australia. It is a pity that the narrator has no idea on how to pronounce the names of Australian and English cities. Not very professional.

What I Didn't Learn from Audible but Wish I Had

I was very disappointed with the misleading book title. A total waste of money.

I now know more about Google than I ever wanted to know, which is not why I bought the audio. The summary is completely misleading. If I could get my money back, I would. As it stands, I will probably drop my audible account because I would hate wasting any more money on another lousy choice. I also hate wasting time, and that's several hours I will never get back.

What I bought from Audible, and wish I hadn't


The author goes on and on and on about really dry internet history. I kept waiting for him to tie it all together into something useful ... but he never did. The title is very misleading.

This is a 'History Lesson' NOT a 'How-To' book.

What would have made What I Didn't Learn from Google but Wish I Had better?

This book need more on the, how to get rich and less of the history of Google.

What could Jamie McIntyre have done to make this a more enjoyable book for you?

He should have used more techniques for SEO and other strategies.