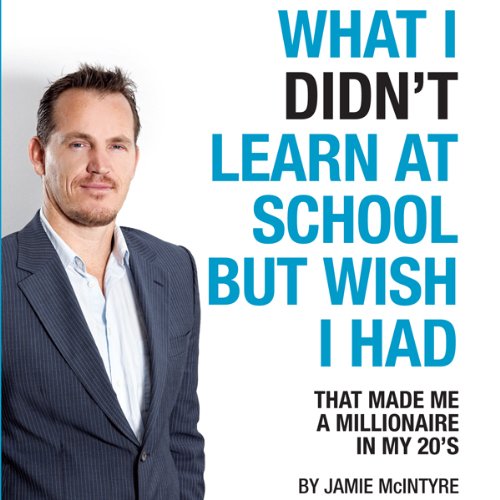 What I Didn't Learn At School But Wish I Had

By: Jamie McIntyre
Narrated by: Bob Hennessy
Try for £0.00

This book is about more than just a rags to riches story of how a young Australian went from sleeping on a friend’s couch, $150,000 in debt, no job or future prospects, to becoming a self-made millionaire while still in his 20s. It’s about something much more powerful and unique that he had to discover in order to excel in the game of life in the 21st Century. That “something” was a 21st Century Educational System.

In this book, Jamie lays the foundation for success with a blueprint of the same educational system he used to transform his life from broke to millionaire in less than five years. Unfortunately, you cannot learn this at school or university, and without it your chances of excelling in the 21st Century are remote. More than 250,000 people worldwide have been exposed to the 21st Century Education already, transforming their lives as a result of its knowledge and strategies. Now it’s your turn to discover this unique system that is not only creating millionaires, but is transforming peoples happiness and fulfillment as well.

"Jamie is the only speaker in Australia that can speak on creating wealth in property, the stock market, business and internet business. Many can specialise in one discipline, but only a true financial master can create wealth from many disciplines." ( Wealth Creator Magazine)
"It would be appreciated if you could pass onto Jamie my sincere thanks for setting up 21st Century Academy. I joined in approximately Nov 2008. I am delighted to say I have made over $300,000 on the stock market. P.S I turn 70 next month, so you are never too old to learn." (David Ross)
"If you are looking to accelerate your financial results and create an extraordinary quality of life - then Jamie’s book is for you! This book is a must-read for anyone wanting to excel and expand their knowledge. Jamie is one of Australia’s most forward thinking educators and a fantastic teacher!" (Dale Beaumont, Creator of the Secrets Exposed Series)

This should be thought in every school at college level and repeated in parenting classes - nothing wrong with a bit of hard work.

Not very good, too much self promotion. So much name dropping. Are you really “friends” with Sir Richard Branson?

Just save your money there are a lot better books out there.