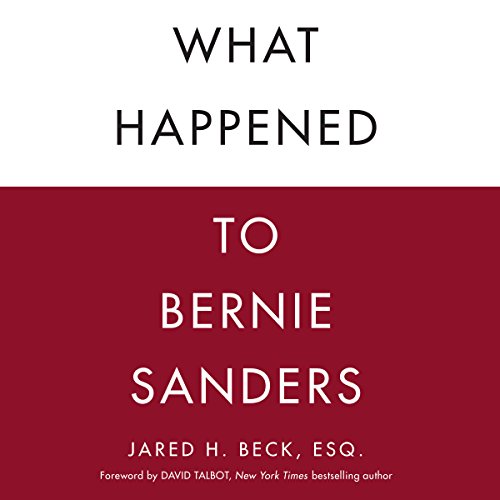 What Happened to Bernie Sanders

What Happened to Bernie Sanders

One year into Donald Trump's presidency, the US 2016 presidential election is still being fought by both parties. As the case of Russian hacking and collusion is investigated, and Hillary Clinton desperately attempts to explain what happened to her and why she lost, a more important question, one haunted by shadowy tactics and campaign double-dealing, rings out: what happened to Bernie Sanders?

Using uncovered documents and other primary sources, Beck shows that Bernie Sanders lost to Hillary Clinton because he never had a chance to win. He illustrates how a web of forces, emanating from elite interests through the mainstream media and Democratic political establishment, and fronted by the Democratic National Committee, operated to ensure that Clinton would secure the nomination. The story of the 2016 Democratic primaries is not one of being "stronger together" or "making America great again"; it is one of how corruption has critically eroded America's political institutions to the point of crippling democracy itself.

The DNC and the Democrats are past caring about the needs and ideas of the working class, and instead have entered a new era of not only corruption but sheer ignorance about the plight of the working class, and this book shows that not only is the DNC not at all a liberal party, or even a left party, or even a center party - it is just a corporate party that will do and say anything it wishes to gain more power, regardless of it it's true or not.

Bernie Sanders is a good man, and the Democrats are the most corrupt political party America has had for a VERY long time.

If you're a Bernie supporter you need to read this

Where does What Happened to Bernie Sanders rank among all the audiobooks you’ve listened to so far?

It's a political book & I am someone who spent a lot of time volunteering for Bernie during the 2016 primary so I loved it.

It validated everything I felt in my gut during the primaries.

He was easy to listen to.

It made me mad and convinced me to never send one more penny to the DNC, DCCC or DSCC. My donations from now on will only go to the candidates I support.

The book starts out painfully slow. I think Jared was trying to let the reader know his credentials, which was fine, but that part went on a little too long.
Once you get past that you will not be able to put this book down.

I was one of those people who gave the maximum donation to Bernie Sanders and followed the campaign closely as a volunteer in the headquarters. I knew about the disgusting activities of the DNC but I didn’t know that my donation was completely useless. I was just so excited that there was a candidate that seemed honest and full of integrity and care for people’s health and welfare.
Jared Beck not only talks about the Sanders campaign but also conveys the story of the inequality in our electoral process. How the system is rigged. How it started and who was involved. How corporations and the DNC really control the media. This is not conspiratorial, it’s a fact based and clearly stated.
I knew we were I. A mess but now I really see now how deeply undemocratic our system is. Even the legal system won’t uphold the will of the people. It’s going to take something huge to break these chains.
Read the book! Know what’s going on. The truth will set you free, or at least give you a better idea of how to spend your money and your time.

What disappointed you about What Happened to Bernie Sanders?

I voted for Bernie Sanders and our whole election system was cheated by Hillary Clinton rigging the election, so I really looked forward to this book.
First, Beck,s wife would have been a better narrator. I did like the introductory remarks. Beyond that, this was a publicly available court transcript without even a conclusion. It was a lazy book, and I felt cheated again. I expected better of Jared Beck.