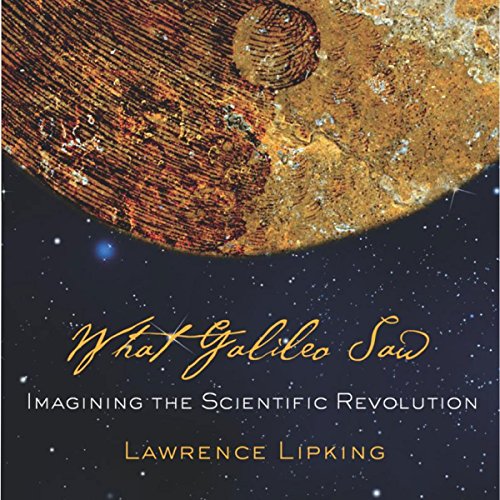 By: Lawrence Lipking
Narrated by: David Otey
Try for £0.00

The Scientific Revolution of the 17th century has often been called a decisive turning point in human history. It represents, for good or ill, the birth of modern science and modern ways of viewing the world. In What Galileo Saw, Lawrence Lipking offers a new perspective on how to understand what happened then, arguing that artistic imagination and creativity as much as rational thought played a critical role in creating new visions of science and in shaping stories about eye-opening discoveries in cosmology, natural history, engineering, and the life sciences.

When Galileo saw the face of the Moon and the moons of Jupiter, Lipking writes, he had to picture a cosmos that could account for them. Kepler thought his geometry could open a window into the mind of God. Francis Bacon's natural history envisioned an order of things that would replace the illusions of language with solid evidence and transform notions of life and death.

What Galileo Saw bridges the divide between science and art; it brings together Galileo and Milton, Bacon and Shakespeare. Lipking enters the minds and the workshops where the Scientific Revolution was fashioned, drawing on art, literature, and the history of science to reimagine how perceptions about the world and human life could change so drastically, and change forever.

"An exceptionally serious and intelligent discussion of issues that tend to transcend the disciplinary boundaries of the history of science." (Peter Dear, Cornell University)

What listeners say about What Galileo Saw

Or actual chapter titles like in a book. It’s a drag trying to navigate these great characters without accurately labeled chapters.

Excellent! A very thorough and in-depth review and analysis which has prompted further reading and research. Loved the book!