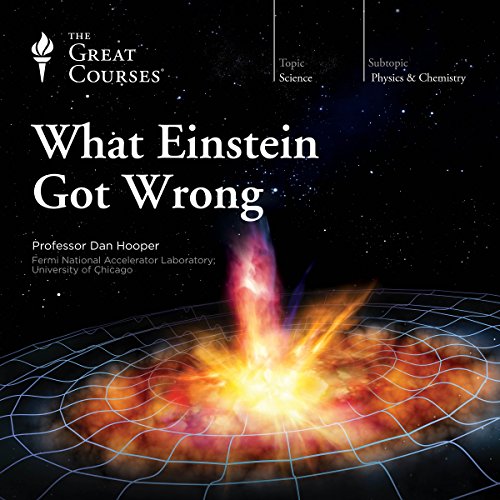 What Einstein Got Wrong

These 12 half-hour lectures are about what Einstein got wrong. He may have kindled a scientific revolution with his famous theory of relativity and his proof that atoms and light quanta exist, but he balked at accepting the most startling implications of these theories - such as the existence of black holes, the big bang, gravity waves, and mind-bendingly strange phenomena in the quantum realm. In a course that assumes no background in science and uses very little math, research physicist Dan Hooper of the Fermi National Accelerator Laboratory and the University of Chicago focuses on Einstein's personal qualities that made him a heavy hitter with relativity but also a strikeout king in many of his other ideas.

You start with two lectures on Einstein's special and general theories of relativity, and in a later lecture you cover his founding role in quantum theory. All are titanic achievements. The balance of the course deals with his false starts, blind alleys, and outright blunders, which are fascinating for what they reveal about the give-and-take conduct of science. For example, the possibility of black holes, which are infinitely dense concentrations of matter, emerged from the equations of general relativity. However, the idea seemed so absurd to Einstein that he believed something in nature must prevent black holes from forming. He was wrong. Similar considerations led him to doubt the existence of gravity waves, insist that the universe must be static and eternal, and hold out for a deterministic theory that would solve the weird paradoxes of quantum mechanics. Again, he was wrong. Dr. Hooper closes with a lecture on the missteps of other great physicists - Johannes Kepler, Galileo Galilei, and Isaac Newton - proving that Einstein is in good company. Even geniuses struggle to find the truth.

What listeners say about What Einstein Got Wrong

Dreadful narration. Reminded me of a newbie at presentations trying to sound interesting. I’ll be staying clear of great course content if this is typical.

About More Than Just His Mistakes

While these lectures do indeed concern some mistakes Einstein made, there is a lot of background material on his work that is very interesting. Professor Hooper is a very engaging speaker and obviously well versed in the subject matter. If you have any interest in The General Theory of Relativity, Einstein's life and work, or the history of Physics in general, I think you will enjoy this work very much. I know I did!

A good series of lectures provide an overview of many ideas of modern physics. From relativity to black holes, the expansion of space and the big bag, to quantum physics and its super positions thru entanglement and shares the story of Einstein’s part in all of these.

Even the great Einstein was human!

an absolutely terrific light speed and most insightful tour thru modern thinking in physics. and where it leaves us now. You'll hear about Einstein... but also the human interaction of many other great physicist and mathematicians who gave us our current (imperfect) concepts of our curious cosmos

Readers with a familiarity with Einstein and Relativity will not find anything new or illuminating about science here.

What it succeeds with is reminding us that all of these amazing scientists we only remember only for what they got right also got a lot of things completely wrong -- which, for me, serves as a nice benchmark of hope that if we continue to work hard at something we believe in deeply that we might one day, even if accidentally, bumble into something marvelous.

And I appreciated that very much.

I found doctor Dan Hooper very interesting I don't know very much about Einstein or quantum theory and I found this to be a very good introduction. It was very mind-expanding in many ways not knowing much about that form of science. I guess that is why we listen to the Great Courses so we can learn more about subjects that we known very little about. I listen to the book light falls about Einstein and found it very interesting. This was a wonderful lecture series to help me understand more about the accomplishments of the theory of relativity

great series covering a ton of great topics. my favorite and most memorable lecture was on the interpretations of quantum mechanics and how Einstein felt about the Copenhagen version. loved this series!! check out dans book dark cosmos on dark matter and dark energy
awesome read as well!!!! Well done Dan!!!

Very chllenging topics nicely and simply explained, surprisingly, I could undrstand it without being deeply familiar with General Relativity.

It's hard to talk about relativity and quantum mechanics and still be clear, especially in audiobook form. This is fairly short and only dips lightly into those subjects, so don't expect an in-depth understanding. It's not bad for what it is though. In some ways, it's more about the people (especially Einstein) and the process of science than the actual science itself. Despite being absolutely brilliant and making incredible contributions to science, Einstein proved to be stubborn, or even immature in some ways, and on multiple occasions held firmly to beliefs about physics that turned out to be wrong. Interesting.