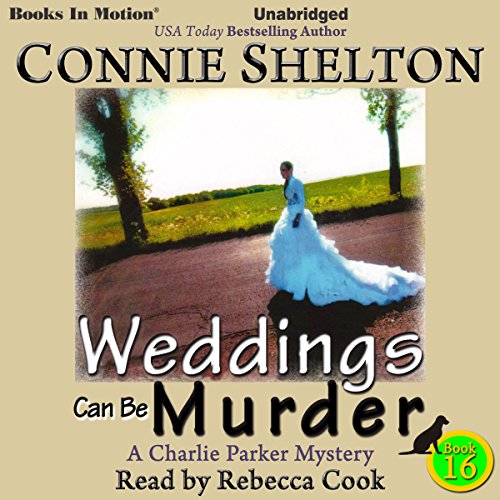 Weddings Can Be Murder

Weddings Can Be Murder

Charlie's brother, Ron, is ready for the happiest day of his life when he will marry longtime girlfriend Victoria Morgan. Charlie will be matron of honor, her husband Drake the best man. But when Charlie stops by the bride's house to pick her up for the ceremony, the place is in disarray, and Victoria is missing. And Ron has no proof of where he was the night before, after he and his fiancée had a terrible argument. Was the fight nothing more than pre-wedding jitters, as Ron claims? Or did the unthinkable happen? Things go from bad to worse when the media jumps on the story and the police treat Ron as a suspect. However, as usual, the answers are not quite so simple.

I didn't even want to continue the story because of the narration. It would have been better if the narrator didn't even try to switch voices for the characters.

Twice I started and never finished. This book skipped around and never got interesting. can't believe there are 14 or more in this series. I was hoping for coming across a new author to follow BUT thix is not one. i struggled to listen to it and had to give up. Don't listen to any of these books

this was a good read, however "RON" had a weird and annoying voice. glad he was not the main character....

A unique twist on a wedding

Another great Connie Shelton mystery with a different twist. A fast and easy read you are sure to enjoy

Weddings can be murder is the 16th book in the Charlie Parker series and I don't know how Connie Shelton does it, but each book seems to just get better and better.

This story has just the right amount of cozy and suspense. Connie goes back in time with her characters in this story and then at just the right time ties it all together with the present time. I actually didn't want the story to end because it was that good.

The next in the series is Alibis Can Be Murder and I am anxiously waiting for it to show up on Audible.

This is one of the best in this series. As always, I can't wait for the next audio book