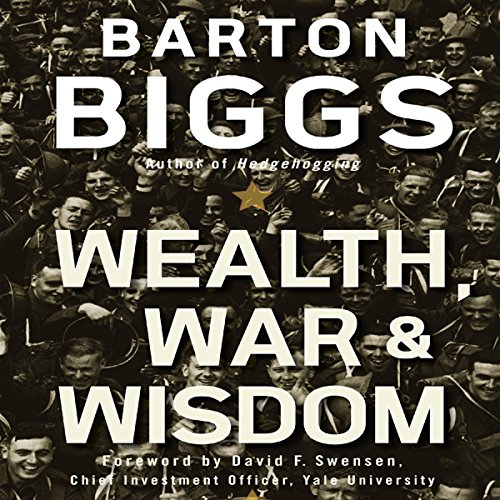 In Wealth, War, and Wisdom, legendary Wall Street investor Barton Biggs reveals how the turning points of World War II intersected with market performance. Biggs will help the 21st-century investor comprehend our own perilous times as well as choose the best strategies for the modern market economy.

"The wisdom of the markets" prevails, even in the most turbulent of eras: the British stock market bottomed out just before the Battle of Britain; the U.S. market turned at the epic Battle of Midway; and the German market peaked at the high-water mark of Germany's attack on Russia. Those events turned out to be the three great turning points of World War II - although at the time, no one and no instrument except the stock markets recognized them.

Biggs skillfully discusses the performance of equities in both victorious and defeated countries, reveals how individuals preserved their wealth despite the ongoing battles, and explores whether or not public equities were able to increase in value and serve as a wealth preserver.

Biggs also looks at how other assets, including real estate and gold, fared during this dynamic and devastating period, and offers valuable insights on preserving one's wealth for future generations.

It's a history book - no real market analysis

It's a history book. The analysis of the interaction between the markets and the political developments is very siplistc and analytically suspect. An intelligent reader can guess what the conclusions will be here (eg do you think it is good or bad to own stocks in a country that loses a great war?).

A Must For Every Serious Investor

This brilliant, knowledeable man of finance offers important lessons for us today. I really enjoyed the historical quips along with Winston Churchill's impressive wit. It was interesting to hear about the personal side of the warring leaders from both sides.

It was fascinating to learn the lessons of the Japanese real estate market post war as well as the information regarding the stock markets during that time.

Biggs offers advice on portfolio and currency diversification. He also analyzes what worked and didn't work for survivors of World War II.

This is an audio book every serious investor should hear. It is an absorbing and thought-provoking primer on wealth creation.

It is touted as a finance book, however it offers more interesting history insights. The primary financial take-away is to diversify investments (investment types and international locations) and, despite big downturns during the 1900s, the stock market over time was one of the best investment vehicles. The narrator was one of the best I have heard and I found the historical insights from WWII and the Korean War unique and intriguing. This was a very enjoyable listen.

Barbarian at the Gate

Wealth, War, and Wisdom by Barton Biggs was informative as well as entertaining. Its main thesis was that wealth could often be preserved in the face of war and other calamities. As a student of both history and the economy, I was not disappointed in the book. Biggs' account of World War II and the Korean wars (in all their tragedies and glories)was detailed. He related specific battles and events of the wars with an accounting of the stock market's performance in that specific country during that time period. (Of course, the underlying belief that the equities market is rational and responds reliably to political and social events continues to be debated.) In his conclusion, Biggs gave explicit recommendations regarding the content and proportion that one's holdings should take in the face of calamity. He also recommended the means by which to hold onto one's money in case the barbarians (in whatever form) contrived to strip the wealthy of their wealth. He further cautioned the reader to learn to recognize the appearance of black swans, which presumably herald the need to change one's investment strategies. The author's breadth of knowledge and research was exhaustive. Since I am not wealthy and thus have little to lose, reading the book was an academic exercise -- but it was also informative and thought provoking.

the book is full of interesting facts and causal details. There is nothing really applicable in today's state of the world.

This is not the book I had hoped for, but isn't nearly as bad as it ought to be, given its digressions and doubtful thesis. I was hoping for a book tracking some of the financial history behind WWII. What Biggs proposes is a "wisdom of crowds" thesis demonstrating that equities markets recognized pivotal moments in the war ahead of popular sentiment or expert opinion. I find this this concept of the wise or rational market patently absurd, a notion born of ontological fallacies and Chicago School propaganda. Rather than market prediction of events, it is selective retrodiction, more or less the technique used by palm readers to simulate clairvoyance. What we get then, is a quirky, compact history of WWII punctuated by a glance at stock market movements, a few of which are made out to be prescient. At times, Biggs does not even seem convinced by his own case, stating it in rhetorical form. "Could it be that the market sensed Rommel's dilemma...?" Etc. Yet for all that, I found Biggs' idiosyncratic history of the war to be interesting, as when we learn that Hitler compared his "lebensraum" expansion in Eastern Europe to the displacement and slaughter of the Indians in the United States. Or the fact that Nazi spies kept track of Churchill's trash to see how much he was drinking. (Answer: a lot.) There are many vivid portraits and wartime episodes. Biggs also tracks the value of various stores of wealth during war, from bonds to paintings, sounding like a catastrophe survival guide for plutocrats. I would have liked much more about the financing and macroeconomics of the war. In any case, while Biggs fails to demonstrate that stock markets are "wise" in times of war, he does confirm that they are often confused, sometimes hysterical, and consistently amoral. No brilliant theme or deep analysis here, but some interesting ideas, biographical sketches, and well-told war stories.

Ended up liking it

Started into this very intrigued, but started to lose interest because I thought it was going to etch forward about WWII and contrast against stock movement every twenty minutes for the entire book. In the beginning it felt that way, but then went into overdrive with WWII information and was more sparing with the stock info. I went into the book wanting to know about the markets, but the WWII info was so gripping I wanted to know more about that. The book delivered and I was very pleased with how it was all put together. I am glad there was much more WWII than stock market info because otherwise you'd feel like the facts were there just to prove the initial thesis- that markets gauge people's sentiment, hope, and lack of hope during a war.

Primarily a history of WWII, with extra emphasis on what happened to financial markets and wealth. The end has his suggestions for keeping wealth through major crisis times (buy farmland). But his comments about how stock markets magically predicted everything are silly, 20-20 hindsight: 'notwithstanding the news coming from the front lines, the stock market somehow sensed that...'

Tales about the war are riveting and make this audiobook an enjoyable experience. However, the refences to the stock market are tenuous and contrived. Better if he had stuck to what he is really interested in - history.

Read this book if you want to know details of some of the most important battles of WW2 and how it impacted the wealth of families in different parts of the globe (from the US, France, Germany to Japan and Korea). Do not expect brilliant investments insights. This is more of a history book than investments’.