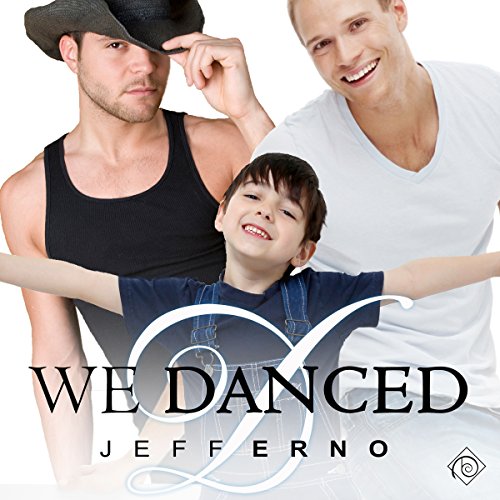 For six years, Rex Payton has focused on two things: keeping his late father's small-town Kentucky bar afloat and raising his nephew Tyler. After the tragic loss of his parents and sister, Rex has no interest in romance. He's respected in his community and regarded as one of Carlisle's most eligible bachelors, but he's accepted that his life isn't conducive to a romantic relationship, especially as a closeted gay man. Enter Josh Billings, a veterinary student who's serving an internship in town.

Josh's deepest passion is helping animals. Romance is the furthest thing from his mind... until the night he meets taciturn, handsome Rex Payton. Chance and an after-hours dance conspire to forge an intimate connection neither man looked for - one neither man can ignore after the dance leads to a kiss. Suddenly romance isn't so insignificant, but it's also not without complications. For this relationship to work, Josh has to decide if he can cope with dating a single dad, Rex has to open his heart, and Ty has to learn to share his dad's affection.

What listeners say about We Danced

Dancing Into Your Heart

Would you listen to We Danced again? Why?

Without question - YES! I fell in love with the 3 main characters and didn't want the story to end.

What was one of the most memorable moments of We Danced?

There is an OMG moment about three quarters of the way into the story that had me on the edge of my seat and pulled at my heart strings.

Which character – as performed by Finn Sterling – was your favourite?

This is a difficult one - but I have to pick Josh who was compassionate and caring.

There were several moving moments, but to say what they were would spoil the enjoyment for anyone who hasn't listened to this wonderful story.

I can highly recommend this story. Jeff Erno is obviously a talented author and having listened to both of his books on audible, all I can say is - I want more!

This is a competent feel-good on a well enough trodden theme of single gay guy with young son finding love even when he thought he never would. Four marks for the reading because it has a couple of very steamy scenes which Finn Sterling took in his stride managing to make them sound passionate rather than riduculous or pornographic!As a side note on the narration, Southern accents abound in this story set in Kentucky and British readers may find them interesting as they are the voices of characters that do not conform to the media stereo types we experience even from Tom and Jerry at a very young age! Perhaps the same is true for some US readers too? Maybe it was just me.

It stared with a dance...

What made the experience of listening to We Danced the most enjoyable?

Sterling's recreation of the characters Erno initially created with words on a page, truly bringing them to life.

Rex. Good lord, yum, wow, I want one, hot! But so tender and caring as well. Really the total package.

What does Finn Sterling bring to the story that you wouldn’t experience if you just read the book?

He brings the characters to life.

It stared with a dance...

It started with a dance -

From the moment Rex Payton and Josh Billings meet, the attraction is mutual and the energy is combustible. Neither of them really knows what hit them, and they both go from trying to convince themselves they don't want to other to finally accepting they can't stay away from each other... they can't keep their hands off each other. Both men have their own reasons for not wanting to pursue anything further than some pretty goddamn amazing sex. Rex is basically the father figure to his young nephew, has been the only father the young boy has ever known. He has to concentrate on keeping Tyler safe and happy. Josh is in town for only a year while he does his residency at the local Veterinarian office, something required while he is finishing his degree to become a Vet.

Small town Kentucky is far from accepting, and when a local "Christian Woman" gets it in her head that simply because Rex and Josh are gay they "must" be doing something to Tyler, the shit really hits the fan. Josh is the man Rex has been waiting for these past six years. The man that can see past the pain Rex holds so dear over the loss of his mother, sister and father. The man that will love him and Tyler unconditionally. The same goes for Josh. The furthest thing from his mind when coming to Kentucky was finding love. But he found it, none the less, and now that they've found each other they are determined to hold on tight. But at what cost?

Let me tell you just how much I loved this book. Not five minutes into the book I could feel the electricity converging between these two. And it was a steady flow from there. All these two men want is to live a happy life, have a family, a man to love, and they find that in each other. Finn Sterling took Erno's words and characters and really brought everything to life. I absolutely loved the way he voiced Rex, I want to marry that voice and have baby's with it! The voice truly fit the character... laid back, easy going, everything he does and says comes from the heart. Sterling has a knack for packing a single word with so much emotion, and that shines through most of all with Josh. Rex is the protector and Josh is voice of reason almost, and that comes across clearly in the audio.

I highly recommend this audiobook, I'll probably que it up and listen to it again. And thank you from the bottom of my heart Jeff Erno for that office sex scene. I do love it when a man knocks everything off the desk, picks his guy up and lays his naked body out on the desk and then pounds him into oblivion. Yeah, I had to turn the air down a couple of notches while listening to this one.

It ended with a dance...

This is a super sweet man with kid love story. It is a love at first sight for the main couple and they go through some trials to get to their HEA; primarily focused on a homophobic, religious relative that doesn't believe gay men should raise children. We get both MCs POV and even a little insight to the grandmother. No real angst, but a little drama and I was rooting for them the whole way. A great comfort read. The narrator does a great job, he really brings the characters to life and has a super sexy voice for Rex. I love the Falcon Sound guys, they are all really great. Worth a credit.

I may have had too high expectations for this story since i loved the other story by jeff erno i listened to, somthis may color my opinion. I was, however, not impressed. The storyline is good but the lovestory told to fast with to little emotion somehow. It is love at first sight - which is not really the problem for me since many of my favorit stories is like that. But it kimds of seem like JE was in a hurry to get to the last two hours of the story, where the story takes a sudden twist into some of the emotional upheveal i anticipated. I think the story could have been better if he had used more time on the build up of the story. The narrator may also have a part in the fact i didnt really feel the story - his speaking voice for ty is not really bad (since he is a six year old kid) but the trouble is that he many times seems to forget who is talking and applies the same voice to the adult characters - which really is annoying.

I had a few quibbles with how some plot points were addressed (Josh's age as a final year vet candidate, child protective services allowing defense counsel to know the exact whereabouts of a child in protective custody), but overall it was a sweet story with some nice sexy-times. Finn Sterling's performance was great, although his narration was a tiny bit bland (his Rex voice, however, dang near melted my panties off). It's hard for narrators to get Southern accents right, and Finn did a pretty darned good Kentucky accent, though it on occasion slipped into more of a Texas twang. Still panty-melting. :)

I listened to this on a long car trip. It's really hard to drive when happy tears are rolling down your cheeks. This book hit a lot of buttons for me, and I loved it to pieces. Finn Sterling does a very good job with the narration. Cover models: Rex...perfect. Tyler...yes! Josh...not even close to how I pictured him. Eh, you can't have everything!

The storyline is solid and sweet. I wish for more books. The narrator is fanatic I will certainly be looking for more of his story telling

Sweet story that could have benefited from a professional editor, who would recognize content from the other authors books, from which or also inflated each books content.

Bottom line to readers, if you like one just be happy with one. If you read one I promise you have read a good book, so don't spend a penny for redundant story structure, lacking character
structure

Yup... read one but don't waste your time and money