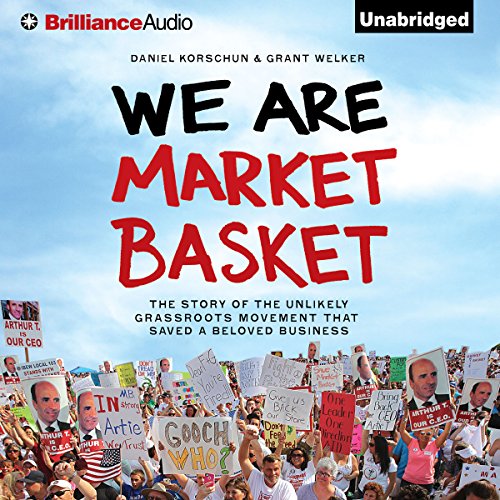 We Are Market Basket

The Story of the Unlikely Grassroots Movement That Saved a Beloved Business
By: Daniel Korschun, Grant Welker
Narrated by: Tom Parks
Length: 7 hrs and 36 mins
Categories: Business, Commerce & Economy
5 out of 5 stars 5.0 (1 rating)

We Are Market Basket

What if a company were so treasured and trusted that people literally took to the streets - by the thousands - to save it? That company is Market Basket, a popular New England supermarket chain. After long-time, CEO Arthur T. Demoulas was ousted by his cousin Arthur S. Demoulas, the company's managers and rank-and-file workers struck back. Risking their own livelihoods to restore the job of their beloved boss they walked out, but they didn't walk far. At huge protest rallies, they were joined by loyal customers - leaving stores empty. Suppliers and vendors stopped deliveries - rendering shelves bare. Politicians were forced to take sides. The national media and experts were stunned by the unprecedented defense of an executive. All openly challenged the Market Basket board of directors to make things right. And, in the end, they prevailed. With its arresting firsthand accounts from the streets and executive suites, We Are Market Basket is as inspiring as it is instructive. What is it about Market Basket and its leader that provokes such ferocious loyalty? How does a company spread across three states maintain a culture that embraces everyone - from cashier to customer - as family? Can a company really become an industry leader by prioritizing stakeholders over shareholders? Set against a backdrop of bad blood and corporate greed, We Are Market Basket chronicles the epic rise, fall, and redemption of this iconic and uniquely American company.

The ins and outs of the Market Basket Movement.

Good read. The narrator was clear, energetic and engaging, I enjoyed listening to this book.