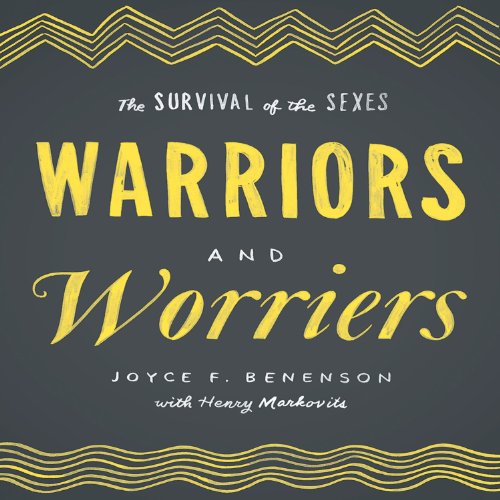 The question of exactly what sex differences exist and whether they have a biological foundation has been one of our culture's favorite enduring discussions. It should. After a baby is born, a parent's first concern is for its physical health. The next concern is its sex. Only in the most modern societies does sex not virtually guarantee the type of future life a new human being will have. Even in modern societies, one's sex usually plays a large role in the path a life follows.

In Warriors and Worriers, psychologist Joyce Benenson presents a new theory of sex differences, based on thirty years of research with young children and primates around the world. Her innovative theory focuses on how men and women stay alive. Benenson draws on a fascinating array of studies and stories that explore the ways boys and men deter their enemies, while girls and women find assistants to aid them in coping with vulnerable children and elders. This produces two social worlds for each sex which sets humans apart from most other primate species. Human males form cooperative groups that compete against out-groups, while human females exclude other females in their quest to find mates, female family members to invest in their children, and keep their own hearts ticking. In the process, Benenson turns upside down the familiar wisdom that women are more sociable than men and that men are more competitive than women.

What listeners say about Warriors and Worriers

Awesome with some dodgy assumptions

This is a book I intend to listen to again. As with most books of this nature you have to beware of the authors bias and twisting the evidence to obtain the desired conclusion. For instance her assertion that fictional female orphans have boring less adventurous lives. She is ignoring Ruby in the Smoke, Vanity Fair and Matilda for a start. Also the reason boys in poor countries are more likely to join the army is simply that those countries tend to have more civil wars and less accountancy jobs available. A more complex link to poverty and aggression may or may not be contributing factor but to ignore the obvious reasons, demonstrates how poor some of the reasoning is.
That said this is a very interesting and for the most part believable analysis of some of the general differences between males and females.

It had always puzzled me why women and girls run through best friends like toilet paper, this makes a lot of sense of just how unique men’s and women’s social dynamics are. Also explains my hobbies as interests when I was a boy. I thought my childhood obsession with big explosions and throwing rocks made me odd. Turns out that’s normal.

I don't recall ever being so annoyed while reading a book. the author is presenting a simple interpretation to human behaviour and forces it on every case study as a sole reason and explanation to everything. while I assume the observations in this book are true, knowing about them provides very little to act upon and in fact is almost providing an excuse for sexism by saying "it's just how I'm wired"