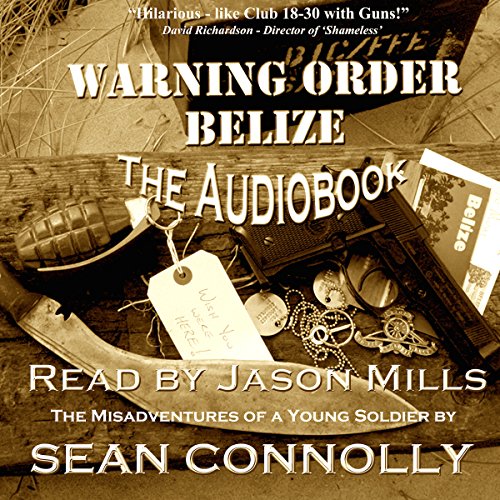 By: Sean Connolly
Narrated by: Jason Mills
Try for £0.00

'First came the misery of training in freezing conditions for a deployment in a very hot climate. This was typical of the British army and so was the decision to send one hundred trained lunatics running around in dense jungle, armed with live ammunition. And they called this the solution?'

Warning Order Belize is a 'down to earth' and witty account of the adventures and misadventures of a young British Soldier in Colchester as he prepares for a tour of duty in Belize .

"I wasn't in the SAS, I don't think I killed many people and if I did it was an accident. These are just the stories of a hell of a good time with real friends and comrades and the life we lived, the pranks we got up to and the friendships we formed. I make no apologies for the fact that these memoirs are humorous, because that's simply how it was for me in spite of the fact that we were fighting a war against insurgents who would happily torture a man to death. And if war is a serious business at least we had a lot of laughs on the way… Like many soldiers I saw it for what it was - one long wild holiday - Club 18-30 with guns… but then I discovered it was more than that!"

Bombardier Sean Connolly brings us his 'laugh out loud' memoirs of The British Army on the Rampage at home and abroad.

Would you consider the audio edition of Warning Order Belize to be better than the print version?

I wouldn't say it was better than actually reading the book, it falls just below that due to the fact that unless your listening to it at home on your own, its very easy to lose concentration unless you have some very good headphones that cancel out all the background noise. I certainly wouldn't listen to it on a train or bus unless I wanted to offend every one within a five yard radius and get shoved off at the next stop due to a certain amount of swearing.

The story itself bought back some some very happy memories, and some not very happy one's, of my time spent in the Army in Baor in the early 80's

What does Jason Mills bring to the story that you wouldn’t experience if you had only read the book?

The author has made a point about banter, it comes across as if you were part of it. But underneath all the skylarking and laughs you can feel the toughness and seriousness of his role within the Army, its not all fun and games and the author gets his across by mentioning how tough his junior training was as well as the fact that the guardroom was always waiting for people to mess up.

The narrator did an excellent job getting the story across, especially the last chapter, and its very difficult to find fault