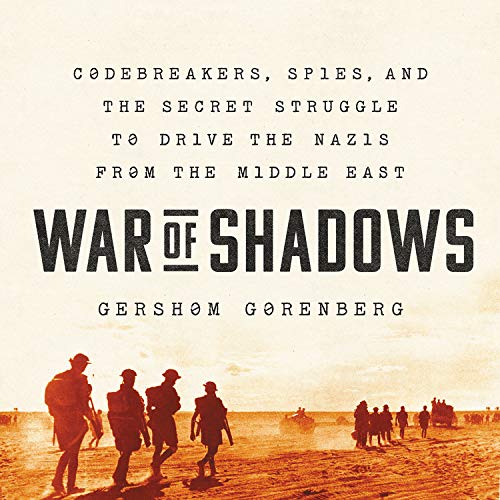 By: Gershom Gorenberg
Narrated by: Fred Berman
Try for £0.00

In this World War II military history, Rommel's army is a day from Cairo, a week from Tel Aviv, and the SS is ready for action. Espionage brought the Nazis this far, but espionage can stop them - if Washington wakes up to the danger.

As World War II raged in North Africa, General Erwin Rommel was guided by an uncanny sense of his enemies' plans and weaknesses. In the summer of 1942, he led his Axis army swiftly and terrifyingly toward Alexandria, with the goal of overrunning the entire Middle East. Each step was informed by detailed updates on British positions. The Nazis, somehow, had a source for the Allies' greatest secrets.

Yet the Axis powers were not the only ones with intelligence. Brilliant Allied cryptographers worked relentlessly at Bletchley Park, breaking down the extraordinarily complex Nazi code Enigma. From decoded German messages, they discovered that the enemy had a wealth of inside information. On the brink of disaster, a fevered and high-stakes search for the source began.

War of Shadows is the cinematic story of the race for information in the North African theater of World War II, set against intrigues that spanned the Middle East. Years in the making, this book is a feat of historical research and storytelling, and a rethinking of the popular narrative of the war. It portrays the conflict not as an inevitable clash of heroes and villains but a spiraling series of failures, accidents, and desperate triumphs that decided the fate of the Middle East and quite possibly the outcome of the war.

"Vivid...fascinating...sure to be among the year's best histories of World War II." (Kirkus Reviews, starred review)

What listeners say about War of Shadows

A thorough history covering the period.

A thorough history covering all of the Axis and 8th Army exploits during the desert campaign in North Africa.

Mr. Berman's cadence and intriguing voice adds volumes to this circuitous account of the secretive sides of WWII. Thank you.

A well written and informative story of war, secrets and how they played out in Africa and the Middle East during WWII.

From the opening scene of impending doom in Cairo, through the twists and turns of the dessert campaigns of World War Two and the parallel spy war that shaped the outcome, this historical tour-de-force reads like a novel. I couldn’t put it down.

WWII in the Mediterranean

Presents a detailed picture of the viccitudes of Axis and Allied military intelligence in WWII, especially in the Middle East and North Africa.