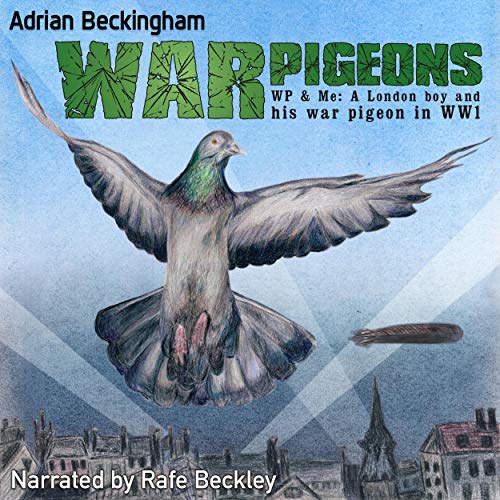 Written in celebration of the 100th anniversary of the end of the First World War, WP & Me is a story relevant to our times in the COVID era and beyond. It follows a London family as they go through the ravages of war upon them. Standing in huge shopping queues outside stores, dealing with rationing, changes in the schoolyard or the workplace, travel restrictions, and an unruly media often confusing the population - all this they must cope with, not to mention the sense of fear everywhere. But instead of being asked to stay behind closed doors, families saw their men sent to fight.

Tommy and "Pigeon", two teenage brothers, begin their war trying to sign up for "the Pal's Army". Caught up in the general excitement that saw the coming war as "the big adventure", they want to fight for England on The Western Front. Everyone at first thought the war would be over by Christmas.

The older brother Tommy gets through to become one of 250,000 child soldiers who joined the British Army during World War I.

Pigeon is turned away by the army. London becomes a very different place to the home he knew. Marching soldiers fill the streets, to later be replaced bomb craters as German "Taube" fill the sky. More and more men volunteer for the forces - until in the end those who did not volunteer are sent to fight against their will.

One day Pigeon finds a wounded pigeon and takes to home. Once it is strong enough to fly he sadly sets it free, but it does not fly away. WP stays around his home. Over time Pigeon begins to raise a whole flock of pigeons as pets - but this is against war regulations. Will he be arrested as a spy?

Pigeon finds himself traveling across submarine endangered waters to France, serving as another underage soldier. Can his carrier pigeons make a difference to the outcome of the war? Will Pigeon ever find his older brother Tommy, who has gone Missing In Action?

Only by living through the reality of war, has Pigeon been able to fully appreciate peace.

What listeners say about War Pigeons 1: WP & Me

The rich quality of the storytelling made this a commendable listen. Thank you so much Adrian Beckingham and Rafe Beckley.

Story For Our Times!

As the world struggles against a new enemy in 2021, this story outlines comparisons to the First World War (eg fake news, rationing) and the differences too.

This is a very well researched, written, and narrated World War 1 story about an ordinary London family, that will make many sit up and recognise our own good fortunes.

This story held my whole family's attention. We felt we came to know the family and experienced what life was like for ordinary families during World War 1. The use of letters between the trenches and life in London was very effective as a storytelling device. This deserves to become a classic on the theme.

This story has been masterfully written and narrated with sensitivity. Full of facts about the changes World War 1 brought to family life in Britain, but by being woven into the story these facts can be learnt without effort. A story every Londoner or student of WW1 would benefit by hearing.

This story touches the heart and teaches a lot of history about family life during the war.

Because this story was worth the time to listen. Thank you author Adrian Beckingham and narrator Rafe Beckley for a solid job done in sharing so important and so moving a subject as WW1.

A powerful war story suitable for older children which leaves the listener fully engaged. Thanks Adrian Beckingham and Rafe Beckley.

A great and vivid story reminding us of the real values in life, and a call both for appreciation what those in the world war one went thru but also peace.

My young teenagers even listened through this audiobook with me. It is never easy getting them to focus but this audiobook was a popular choice. As a parent I like the positive morals in the storyline too. This is a sad story because its about World War 1, but one we nevertheless took a lot of positivity away from.

I love animal based stories and was amazed by some of the cool stuff this story taught me about pigeons, like how they are reared and trained to home as pets, but also the amazing way their fathers teach them to fly, and how they carry a mysterious gift in navigation to always help them find where they are taking messages to. We could learn a lot about how to run our own communities, if we gave everyone an equal shift as leader, like pigeons do in their flocks. An extraordinary story, and I really felt part of family life in this story too.

This is a well written and researched story which helps readers/listeners better understand World War 1. The writing style and narration are both good quality productions.

The combination of a great author and narrator brought this family story of life during World War 1 to life. A useful study aid to anyone learning about The Great War, this is packed with facts without seeming at all studious. Masterful storytelling.