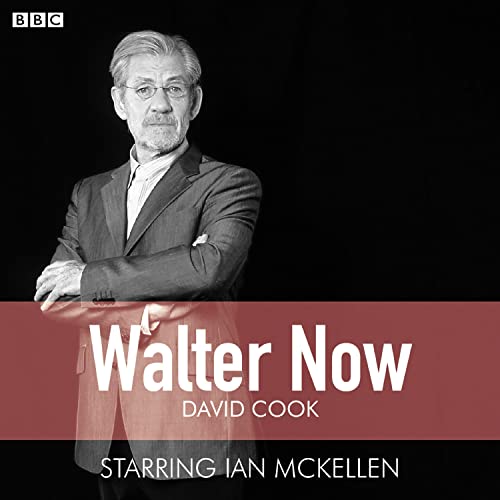 By: David Cook
Narrated by: Sir Ian McKellen
Try for £0.00

A BBC Radio 4 full-cast dramatization starring Sir Ian McKellen, written by David Cook as follow-up to his 1982 Channel 4 social commentary drama, ‘Walter’, about a man with learning difficulties. ‘Walter Now’ was originally broadcast as the ‘Saturday Play’ on 10 January 2009 and repeated on 25 September 2010.

In November 1982, Channel 4 launched with David Cook’s ‘Walter’. Now, more than 25 years later, this award-winning writer brings us up to date with Walter's life and Sir Ian McKellen recreates his extraordinary performance.

Walter is now a pensioner. Following the death of his mother, Walter spent many years living in a psychiatric hospital. When that was closed down he moved to hostel accommodation where he is isolated and lonely. When his support worker hears of a house share with three others, he suggests Walter. But Walter is twice the age of the rest. Will they accept him? Will he cope with independent living? Will they integrate with the community around them?

An excellent addition to a play written years ago for the then newly formed Channel4. Sir Ian portrays Walter as a pensionable age man. What a piece, accompanied by a great cast, very listenable.

Sir Ian McKellen, a master as always. This would be worth listening to just to hear him act. But the story was a welcome window into the lives of this group of mentally challenged adults who are trying to find their place in this world.

Sir Ian does it again.

Where does Walter Now (BBC Radio 4: Saturday Play) rank among all the audiobooks you’ve listened to so far?

What was one of the most memorable moments of Walter Now (BBC Radio 4: Saturday Play)?

Walter managing to get along with his roommates.

Everything. The man does an excellent job at playing a man with learning difficulties.

I felt like crying when Walter was thinking of his mother during the bus trip to his new home.