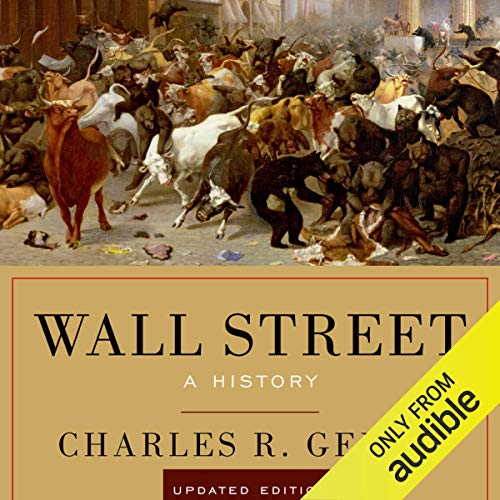 By: Charles R. Geisst
Narrated by: Stephen McLaughlin
Try for £0.00

Wall Street is an unending source of legend - and nightmares. It is a universal symbol of both the highest aspirations of economic prosperity and the basest impulses of greed and deception. Charles R. Geisst's Wall Street is at once a chronicle of the street itself - from the days when the wall was merely a defensive barricade built by Peter Stuyvesant - and an engaging economic history of the United States, a tale of profits and losses, enterprising spirits, and key figures that transformed America into the most powerful economy in the world.

The audiobook traces many themes, like the move of industry and business westward in the early 19th century, the rise of the great Robber Barons, and the growth of industry from the securities market's innovative financing of railroads, major steel companies, and Bell's and Edison's technical innovations. And because "The Street" has always been a breeding ground for outlandish characters with brazen nerve, no history of the stock market would be complete without a look at the conniving of ruthless wheeler-dealers and lesser known but influential rogues.

This updated edition covers the historic, almost apocalyptic events of the 2008 financial crisis and the overarching policy changes of the Obama administration. As Wall Street and America have changed irrevocably after the crisis, Charles R. Geisst offers the definitive chronicle of the relationship between the two, and the challenges and successes it has fostered that have shaped our history.

What listeners say about Wall Street

Many books in one; best linking of stories, eras

I have read dozens of books in this genre. Yet, here I had many "gee whiz" moments, understanding in new ways (and sometimes clearly for the first time) how many of these dots connected between personalities, groups in society, financial innovations and eras, and various world players affecting, and affected by, Wall Street. The explanations are sensible and clear, and flow sensibly across time and through these overlapping factors. Many books have picked up some segment of this, and I have heard many of these stories in a fragmented way, but these fragmented books tended to wander into details that can lose the thread of important facts and ideas, or to start and stop at arbitrary points. Half a dozen segments here could be books in themselves.
As for the narration, at first I thought it a bit on the relaxed and plodding side, but as time has passed, I have found it very listenable, and able to hold my attention.

Wow, what a journey.

Would you consider the audio edition of Wall Street to be better than the print version?

This was one of the must educational and detailed accounts of anything I've experienced in a while. I really couldnt wait to find out what would happen in each chapter

What other book might you compare Wall Street to and why?

its far too long for that, don't overdo it.

strongly recommend, though it's actually quite technical. Learn the vocab to improve your read of it.

If you only want a surface level review of wall street history, this may be the book for you. I prefer deep dives into pivotal events and the people involved so this book did nothing for me.

A story of finance

This is a book which brings the history of Wall Street to life, explaining the connections between it and greater world history. I recommend this book to anybody who is even slightly interested in history or finance.

Written from the view of one who hates capitalism

Has Wall Street turned you off from other books in this genre?

The narrator was adequate. Somewhat monotone and dry, but pronunciation was OK.

It covered a wide range of time frames

The title and publisher description of this book are misleading. This is not an overall history of Wall Street, but rather a history of what the author considers examples of unfairness, greed, and criminality. The formal synopsis suggests that a history of Wall Street would not be complete without a "look" at the history of unsavory characters and corruption. This book, however, focuses almost solely on that element. Most sections start with only a brief discussion of Wall Street, before launching into long discussions on various other negative aspects of the economy, from trusts and monopolies, to scandals and criminals. Sometime in telling these anecdotes of "greed", huge periods of the book go by without even a mention of Wall Street itself. In the end you are left with very little actual history of Wall Street, let alone any nod to the fact that it was a major element in creating one of the most powerful economic systems in the history of human development. While I acknowledge that any true history of Wall Street should include a look at the effects of greed and corruption, this book takes it too far. In Chapter 12, during the short section about the effects of 9/11, the author gives just a brief description on the actual effects of the event before pointing out that certain stocks were shorted heavily before the attacks. From there the author launches into a diatribe about how Wall Street critics and regulators have complained about short selling for nearly 200 years to "no avail". One can't help but come to the conclusion that the author is attempting to liken short selling to financal terrorism. At this point I shut the book off.

Good story. Worth the read. The author has an axe to grind.

Great book overall. The author clearly isn’t a fan of Wall Street, and is pro Glass/Steagall. The obvious agenda doesn’t detract substantively from the book however. I recommend for anyone interested in the broad arc of American financial history.

This book gives familiarity to historical names and highlights what made them widely known. It also helps put America’s history in context because of the monies and economies that built our country.

must read for anyone in finance

What did you love best about Wall Street?

The detail Geisst goes into is difficult to find elsewhere. He aggregates key information for every historical period starting in the 1800s.

Hearing how bear raids were executed in the 20's was eye opening.
Too much information to highlight in a review.
But suffice to say anyone in finance needs to consider this masterpiece.

This is a great book to learn about Wall Street History. The best overall book on the history of Wall Street.

Like your worst junior high history book, read in a monotone. I tried to listen to it twice and couldn't bear it.