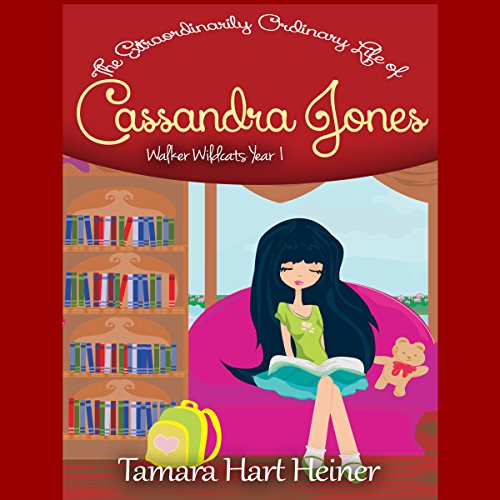 What's special about Cassandra? Absolutely nothing. She's as ordinary as any other fifth grader. And yet her ordinary life is riddled with hilarious and sometimes heart-breaking mishaps as she guides herself through the world of pre-teens on the brink of adulthood. She's the new girl at school, uprooted from her beloved state of Texas and relocated to the hillbilly Ozarks of Springdale, Arkansas. She tries to hold it together as she weathers stubborn parents, vicious dog attacks, and petty cat fights. But when her teacher challenges her to push herself in a friendly competition, Cassie realizes she's been selling herself short. This book compiles episodes 1-6 of season 1, Walker Wildcats Year 1.

cassandra a 5th grader navigates her life the only way she can by doing whats right and making good choices for herself great book great narration :)

It was a cute Children's book. Cassie is a girl I can identify with. She is really into academics. I was at that age too. I got this book through storyorigins and this is my voluntary and honest review.

After Moving from Texas to Arkansas Cassandra's new life as a new girl in fifth grade is about to begin. I Love Cassandra Jones I love that we can see her grow through out Year 1. I also really liked the narrator.

Cassandra is nervous. She just moved to a new place. She'll be starting a new school. She knows nobody. She's pleasantly surprised to find how quickly she fits in and makes friends. She also joins a lot of activities that she really enjoys. I really enjoyed this story. I found it very adorable. I also found it very realistic. There were a few things that I didn't really care for in the book, but they actually happen. Not writing about them doesn't exactly make them go away. I can say that this book has helped me NOT miss some of the dramas we experienced in school. I think all the characters were adorable. There were a few snotty brats in the book, but they exist in the real world too. Expecting them to be punished for their actions when they don't in reality would be a stretch as well. I did really see the child me in Cassandra. Well, in some ways. This book was narrated by Hysha Nesmith. I do not have a problem with her narration. I felt like she could have been reading a story to children in schools or libraries. She knew her audience and she nailed it. There were just a few minor issues I had with it. The noise at the beginning of each chapter was a little cringy, but minor. She also has parts of the book where she gets a little choppy. This book combines all the volumes of Year 1 into one book. I think it was pretty clever. I know I'm not a child, but I enjoyed this book. I may not have children now but I may one day and it will be nice to have a list of books I'd willingly read to them already!

I enjoyed this book. The narrator did a decent job and was pleasant to listen to. She wasn’t consistent with the different character voices and there wasn’t much difference in character voices or narration voice. She also didn’t flow in her reading, pausing at wrong times not with a period etc. the author did a great job creating a world of a 5th grader. It was appropriate in the situations the girl faced and the thoughts and emotions a typical 5th grader would experience was spot on. Listening to this book brought back memories of when I was in 5th grade and I was able to relate to the characters. Great job. I think my daughter would enjoy this book if she were age 10 or older.

This book would be great for younger girls and growing up but for adults it is not a good book.

A fun audible book, the narrator is very lovely and is sure to hold your attention!

I know what it is like to be the new kid in school--as a 4th grader I was introduced as "our new little girl from Germany," which had been Dad's last military duty station. Moving from Texas to rural Arkansas was probably just as daunting for Cassie, and the experiences related rang very true to my memories of trying to fit it in and being baffled by new and different things others took utterly for granted. There are joy and tragedy and homework, siblings, best friends and failed friendships, all well told, and narrated by Hysha Nesmith in an appropriately high-pitched fifth grade girl's voice. I, as an adult, was fully engaged; I would expect the early chapterbook readers would be equally delighted. This was originally published in shorter episodes but is here consolidated into a single, smoothly flowing narrative encompassing Cassandra's entire fifth grade school year.

I am way too old for this book, but I think my granddaughter would love it and I might get it for her to read and see if she wants to read more of the series. There are quite a few life lessons that are covered, and they make good examples for us all. I am not going to ruin the story for anybody who reads or listens to it, but a lot happens to Cassandra as she is moved from one state to another and enrolled in a new school where she must start over and make new friends.

I was given a copy of this audio book by the author. My review is voluntary.