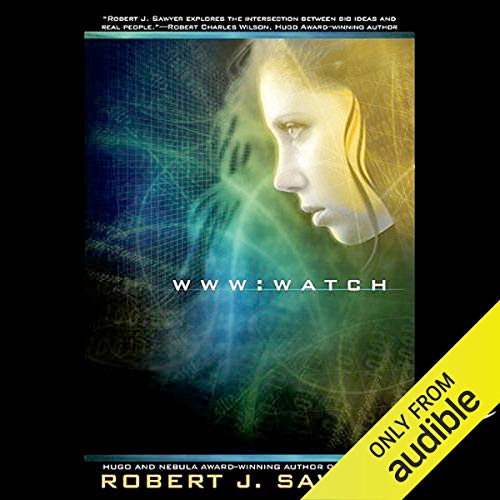 Webmind is an emerging consciousness that has befriended Caitlin Decter and grown eager to learn about her world. But Webmind has also come to the attention of WATCH - the secret government agency that monitors the Internet for any threat to the United States - and they're fully aware of Caitlin's involvement in its awakening. WATCH is convinced that Webmind represents a risk to national security and wants it purged from cyberspace. But Caitlin believes in Webmind's capacity for compassion - and she will do anything and everything necessary to protect her friend.

"Watch is a helluva fun read and an excellent science fiction book." (SF Signal)
"Cast members complement one another and are effective in differentiating the various characters and story threads. They drive forward the momentum of the plot and flesh out the novel’s distinct personalities." (AudioFile)

What listeners say about WWW: Watch

The reading is great with familiar voices for the different characters. The story picks up from the first book, WWW wake, and continues the storylines.
If you liked the first book you won't be disappointed!

As a modern day fairy story it is okay, perhaps. The series unfortunately unwinds to a silly end. The performance is good but the story has too many contentious elements and opinionated discussions. A friend of mine would consider it regressive rather than progressive, and I tend to agree with him.

The first book in this series was pretty good, this book however, is simply put, amazing. I have not been so moved by fiction in a very long time. As for the audio production, it is top notch, a great cast of readers somewhat dramatize the story and give it additional life. This story is one to share with everyone, I urge anyone reading this to give it a try. I have downloaded a good deal of audiobooks, and this is the only one I ever bothered to write a review of.

Watch is Sawyer's best book to date. It was engaging and exhilarating throughout. The author's opening comments talk about how middle books are usually the worst, but I agree with him that this will end up the highlight in the trilogy. The entire narrator cast reunites for the sequel with perfect voices. One of the actors was a little low in volume for some reason, so I had to keep adjusting the volume for his sequences. The only detractor of an otherwise awesome audio book.

Robert J Sawyer has his flaws as a writer. His books are not exactly breathtakingly thrillers and his characters are often simple. I can understand why some people is annoyed by his liberal world view and morals. Even for a progressiv Scandinavian as me, it can get a bit to politically correct. People just aren't that nice, I find myself thinking while reading his books. And in this one especially the autistic father is a bit to much a construction for me to believe in him, Sawyers research about autism shines through the description of him.

But i really like his books. The Neanderthal trilogy and now this one are very entertaining and impossible to put down when you've started reading them. They are classic science fiction stories, driven by ideas, rather than plot and characters and as a reader you shouldn't expect more. Or less.

I am really looking forward to the last book in the series.

Although this audiobook is well suited for a teenage audience, I still found it to be thoroughly entertaining. There is nothing groundbreaking in this book. It is not a literary masterpiece by any means. However, I thought the author did a great job of keeping the storyline interesting, and the narrators portrayed the characters well.

In fact, I just finished listening to this audiobook for the 2nd time, and I seldom give any audiobook a 2nd listen.

I started reading the first book in this trilogy, WWW.wake yesterday lunchtime.

I have just finished this book, WWW.Watch today, 1932 hours EST.

That tells you all you need to know what I think of this work.

It is brilliant, clever, affecting, funny, hopeful and glorious with optimism.

I can't wait, I just can't wait for the third book, WWW.Wonder.

Jessica Almasy is wonderful in this, as young Caitlin Decter, we are going to hear a whole lot more of her. The others played their parts excellent well, but Almasy is peerless.

Audible, thank you. I shall listen to this over and over again.

It Grows on You - in a good way

I began thinking part 2 was pitched at young adolescents, but was gradually disabused of the idea. The concept, begun so well in WWW.Wake, took a while to reach the forefront in this instalment. Overall, the wait was worth the patience. In any event, the narrators are very good, particularly the Caitlin Dexter voice. It makes you want to have more elaborate credits so you can tell which voice is which narrator. Webmind is well done, too. Just enough of the juvenile to be believable, I thought. All up, I thought it a creditable Book 2, but Book 1 is still out front for me. I'm keenly looking forward to the concluding installment.

I listened to this on a long drive to a friend's house. Audible had put it on the 2-for-1 credit sale, where they had offered several second-book-in-a-series books. I read the first book of this trilogy three years ago when it was nominated for a Hugo Award.

In the first book of this series, Caitlin has gained sight for the first time, and ends up also being able to see the world wide web from her implant. Not too long after, she starts communicating with WebMind, an unknown consciousness brought up from the web itself. This book starts with her communicating more with [him], telling her parents, and the worldwide internet security people learning about it.

It is interesting to read a book about internet security in light of recent events. Robert J. Sawyer actually uses Caitlin and WebMind to make the argument that surveillance isn't bad, in fact people do less illegal activity when they know they're being watched. So that was an interesting conclusion, and that idea combined with the multiple narrating voices made the ending very creepy. I'm not sure he meant it to be, but I definitely found it to be. 1984 isn't true! Surveillance makes society better! What.....

The author's info-dumps are a little silly. We learn a lot about evolution during a makeout session. I don't like it when a main character knows everything, is wiser than everyone, or can figure out anything on her own. It actually makes the book less exciting to have everything laid out for the reader that way. Her parents are so supportive! She can outsmart the NSA! Yeah.

For the most part, the audio production by Audible Frontiers was well done. The woman narrating Caitlin was great, but seemed to use accents on a whim (Caitlin and her mother are from Texas but their accents only show up every once in a while), and the two American characters' sections had such low volume that I had to keep adjusting in my car. I don't want to be thinking about production as I listen to a story, and I had to. The other misstep was having the author introduce the story.. usually a good idea, but RJS was a bit pompous about how his 2nd books of trilogies are always the best, and how LUCKY I was going to be to hear this, which might be his BEST BOOK EVER. I almost turned it off right then! I was glad I stuck with it, but fair warning.

Yes, the story is very engrossing. Lots of interesting threads.

Wondering what would happen next.

Unfortunately, I was most moved to cringe every time the narrator mispronounced

A very interesting examination of consciousness in many contexts and at many levels.

Super continuation of the story begun in "Wake"

This is not a book that stands on its own. It is part of a trilogy and you really should read WWW:Wake before you read this one. That being said, this is very good. The concept Mr. Sawyer advanced in the first part of the series is flushed out and made even better in this one. I think I enjoyed this second piece more than the first one. The characters were more real and fully actualized than they were in the first piece, This is very fine concept-based science fiction. In other words, this is not a space opera or a thriller set on another planet. It's the real deal, genre-wise. It made me think. That's why I read ... especially sci fi! Read part 1 then definitely read this. Haven't gotten to the 3rd installment yet, but looking forward to it.

Great story marred by heavy handed didacticism. The story and the points could've been made by having Webmind experiencing the points that Sawyer wants to make. Instead, Sawyer puts words into the mouths of Webmind and Caitlyn, reducing them to mere mouthpieces, embarrassingly obvious plot devices to parrot Sawyer's points of view.

INevertheless, enjoyed the story: it was a good way to pass the time while I knit.