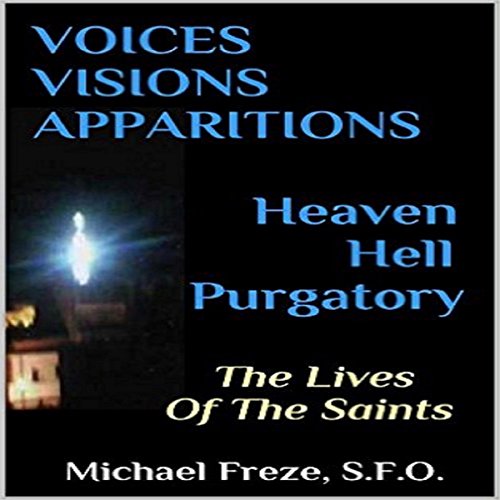 The Lives of the Saints
By: Michael Freze
Narrated by: Locust & Honey Publications
Length: 57 mins
Categories: Religion & Spirituality, Non-fiction
5 out of 5 stars 5.0 (1 rating)

Supernatural visions in the lives of the saints!

The author has appeared on numerous national television shows for his works: The History Channel, The Phil Donahue Show, the Leeza show, and the EWTN Network (Mother Angelica Live). Best-selling author of They Bore the Wounds of Christ: The Mystery of the Sacred Stigmata, which received top-notch reviews, Michael Freze, S.F.O., has previously written seven nationally-published traditional print books on Bible topics and supernatural phenomena.

God loves us so much he was crucified.

I highly recommend this fantastic talk. God bless you all and Mary intercede for you.

Visions of Heaven, Hell and Purgatory

What did you love best about Voices, Visions & Apparitions: Heaven Hell Purgatory?

This book is a compilation of historical accounts of visions of heaven, hell and purgatory. It is good for folks studying these issues or for those interested in accounts of the after life. The Purgatory section is the longest.

This is a non-fiction work so the ending is a little different. The last section is about how the saints were known in history by their visions of the after life.

What does Locust & Honey Publications bring to the story that you wouldn’t experience if you just read the book?

The narrator does a great job. I couldn't do dishes and clean out my closets while listening to the book if I read the print version.

Many of the visions are moving. The description at the beginning of the book and how to evaluate a vision and how it should make you feel was quite good.

Great book for those interested in the after life or Catholic history.