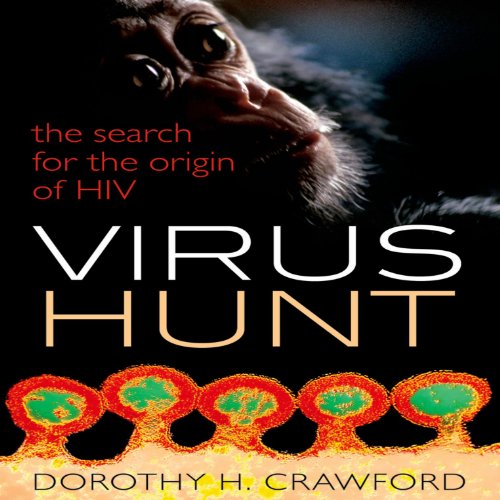 The Search for the Origin of HIV
By: Dorothy H. Crawford
Narrated by: Alice Gilmour
Length: 6 hrs and 48 mins
Categories: Non-fiction, Medicine
5 out of 5 stars 5.0 (3 ratings)

The hunt for the origin of the AIDS virus began over 20 years ago. It was a journey that went around the world and involved painstaking research to unravel how, when, and where the virus first infected humans. Dorothy H. Crawford traces the story back to the remote rain forests of Africa - home to the primates that carry the ancestral virus - and reveals how HIV-1 first jumped from chimpanzees to humans in rural southeast Cameroon. Examining how this happened, and how it then travelled back to Colonial west central Africa where it eventually exploded as a pandemic, she asks why and how it was able to spread so widely. From hospital intensive care wards to research laboratories and the African rain forests, this is the wide-ranging story of a killer virus and a tale of scientific endeavour.

This book is an epidemiologist's dream. This is an utterly engrossing history of the hunt for the origin of the HIV virus. I was completely surprised that scientists seem to have been able to trace the origins of HIV to seemingly pinpoint places and times, stretching back further than I had previously thought. Rather than one continuous storyline/narrative, the author breaks this up into chapters that weave parallel but ultimately converging lines of investigation, tracing back from those first diagnosed, through the carriers who were the unwitting spreaders of the pandemic, through the disparate strains of HIV that became identified and laid a train back to the places and animals of the virus' origins. Incredible and would strain belief if not true. This audiobook had me from minute one. Still, I can't give it a full five stars. At time, I found the writing a bit dry, as if reading a collection of scientific papers. A more skilled writer might have found a way to craft this more as a whodunit in the spirit of a good true crime writer for instance. For instance, you never get much of a sense of who any of the multitude of scientists are behind the investigation - thus the narrative appeals solely to the intellect rather than any emotion. As well, I found myself getting lost at times in the array of different names of primate species, their lineage, as well as the alphanumeric strains of the different HIV strains. Indeed, the audiobook frequently references various diagrams and figures that would only be accessible in the actual book and would help clarify things. Still, those with a curiosity or interest in the origins of this modern pandemic will enjoy this book.

Essential information but need some kind of background to understand it

Fascinating story, less accessible than spill over by David Quanmon but full of interesting facts. Generation I felt was a little too rapid and sterile for such an important topic.

Not terrible but not a recommendale book for me.

What was most disappointing about Dorothy H. Crawford’s story?

It was very 2 dimensional. Only chapters 5 and 6 drew you into the story. The rest was incredibly flat. I think the facts were brilliant but if you are going to write a book and then put it into audio, there needs to be life and color to the numbers and data otherwise you're reading a chart or graph aloud.

What does Alice Gilmour bring to the story that you wouldn’t experience if you just read the book?

I did like her performance overall however, she pronounced medicine as MED-cine and not med-I-cine. Not the biggest deal in the world, especially if this were a book on golf or party planning but seeing as how the foundational topic is medical I felt like it was a horrible word to be mispronouncing.

Was Virus Hunt worth the listening time?

I think if anything is learned whatsoever, it is time well spent but I would not recommend this book as I felt the story line was not colorful enough. It felt like looking down a string of facts hurriedly tied together without the slightest attempt to paint a picture for the reader. Some parts of the book were several minutes of nothing but genetic code and scientific names. Both of those things are vital for this type of book as a whole but you need to put them into a frame for the reader, to tell the STORY of both those very important things.

I felt other books covered the topic with story telling that brought you into the fold better. The book Spillover does not cover HIV in such detail but I think it tells the story of the virus, its origins and evolution with greater inspiration. This is more technical but fails to tell the story of the those facts.