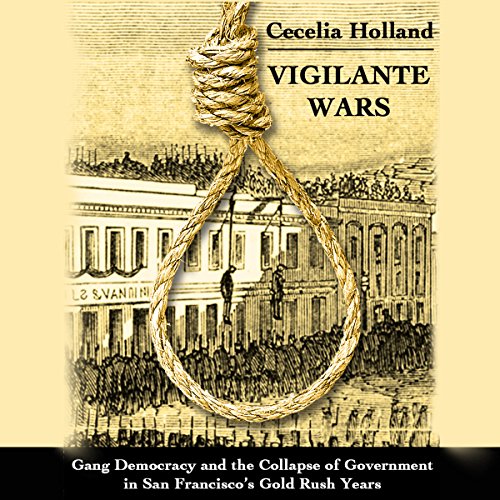 The 1849 Gold Rush in California brought to a boiling point the new state's wild and unruly politics. Before long, there was mob rule in the muddy streets of San Francisco. This decline of constitutional authority on the West Coast mirrored the fumbling actions of Congress and the federal government in Washington as a nation deeply divided over the slavery issue struggled to find a way to preserve the Union.

©2012 Cecelia Holland. All rights reserved. The special contents of this Now and Then edition copyright 2012 by Now and Then Reader, LLC (P)2016 Audible, Inc.

What listeners say about Vigilante Wars

Quite a lotta history

But I kept falling asleep! Would consider reading again. I certainly got educated about the riotous upstart of a troubled city.

Lawlessness in San Francisco in the Old West


This was a great book about the Vigilante Wars in San Francisco in the old west. I knew about the San Francisco Vigilance Committee from the great show the History Channel used to run, Wild West Tech, hosted by Keith and David Carradine. After the Committee had disbanded a visitor a few years later asked about them. A resident responded "Toll the bell sir and you shall see." A thrilling , yet sad commentary on the will of the people vs lawlessness, truth is stranger than fiction. It's not much different in some aspects than politics today. A great short read. I read this book using immersion reading while listening to the audiobook version, narrated by Bronson Pinchot. It wasn't the best reading, more rote with only few sections of emotion.