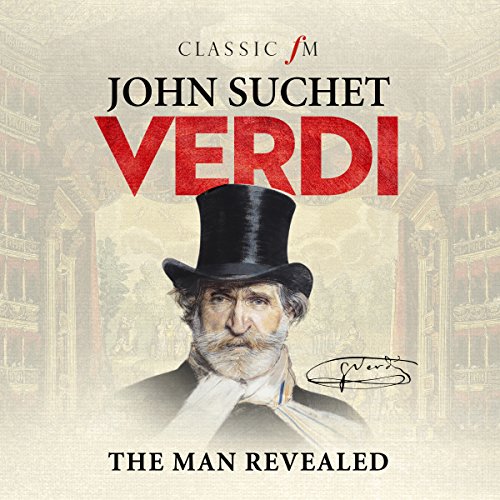 Giuseppe Verdi remains the greatest operatic composer that Italy, the home of opera, has ever produced. Yet throughout his lifetime, he claimed to detest composing and repeatedly rejected it. He was a landowner, a farmer, a politician, and a symbol of Italian independence, but his music tells a different story. An obsessive perfectionist, Verdi drove collaborators to despair, but his works were rightly lauded from the start as dazzling feats of composition and characterization. From Rigoletto to Otello, La Traviatato to Aida, Verdi's canon encompassed the full range of human emotion.

His private life was no less complex: He suffered great loss and went out of his way to antagonize many erstwhile supporters, including his own family. An outspoken advocate of Italian independence and a sharp critic of the church, he was often at odds with 19th century society and paid the price. In Verdi: The Man Revealed, John Suchet attempts to get under the skin of perhaps the most private composer who ever lived. Unpicking his protestations, his deliberate embellishments and disingenuous disavowals, Suchet reveals the contradictory and sometimes curmudgeonly character of this great artist, convicted throughout much of his life but ultimately unable to walk away from the art for which he will be forever known.

What listeners say about Verdi: The Man Revealed

The many layers of Verdi, the man and his music


John Suchet does full justice to Verdi’s extraordinary life and work which made him in Suchet’s words the ‘creator of the best operas ever written’. But he doesn’t intend his book to be just another account, however comprehensive, of Verdi’s operas, but to present the whole man.

There is the ‘Man of the Land’ managing his farming estates; the young man devastated by the deaths of his wife and two little children within 22 months; the temper tantrums and the psychosomatic illnesses; the quarrels, deep friendships and liaisons; the politics and the importance of Italian independence; his odd behaviour (hermetically sealing up his piano after Aida); his cruel treatment of his doting parents (legally separating from them and denying his mother her right to the chicken yard!)… and so it goes on.

It’s all here and a great deal more, but Suchet tells us of a discovery in 2016 of 5,300 pages of notes which are to be digitised and may well reveal more.

As heard every day on Classic FM, Suchet has a pleasant voice and is a trusty and honest guide deeply immersed as he is in his knowledge of Verdi and passion for his operas. The only thing missing is the music, but extracts from the great operas would presumably have been a much more complicated and costly production job. But even without excerpts from the operas, Suchet has succeeded in giving us the whole man and his music.

This book is a must for all classical music fans. I am a huge John Suchet fan and have all his books so I was very excited to find Verdi The Man Revealed in audible format. It was a huge treat to hear John read this book and I fervently hope more of his wonderful books, of course read by him, are going to become available on Audible.