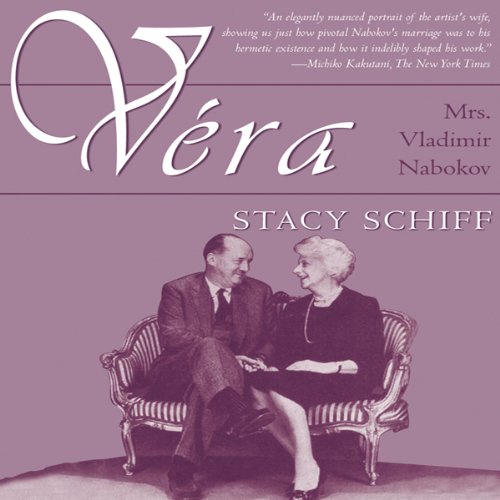 By: Stacy Schiff
Narrated by: Anna Fields
Try for £0.00

Hailed by critics as "monumental" ( Boston Globe) and "utterly romantic" ( New York magazine), Véra, the story of Mrs. Vladimir Nabokov, brings to shimmering life one of the greatest literary love stories of our time. Vladimir Nabokov, author of Lolita, Pale Fire, and Speak, Memory, wrote his books first for himself and secondly for his wife.

Set in prewar Europe and postwar America and spanning much of the 20th century, this telling of the Nabokov's 52-year marriage reads as vividly as a novel. Véra, both beautiful and brilliant, is its outsized heroine, a woman who loves as deeply and intelligently as did the great romantic heroines of Austen and Tolstoy. Stacy Schiff's Véra is a triumph of the biographical form.

"A riveting portrait....Anna Fields' intelligent narration is necessary to convey the life of such a woman adequately. Highly recommended." ( Library Journal)

What listeners say about Véra

Wish to return this!

I really did not get on with this book. Disliked the readers voice and found the story slow and uninteresting. I would like to return it but I cannot work out how to!

If you could sum up Véra in three words, what would they be?

What was one of the most memorable moments of Véra?

Too many to single one out.

I highly recommend this biography to anybody who loves a great story, a lively writer and an experienced narrator.

I'm often fascinated by the woman behind the creative genius, and this book was no exception.

Wife and literary partner/agent of Vladimir Nabokov, Vera's life story and the portrait of their marriage was fascinating, even if a little tough to believe at times.