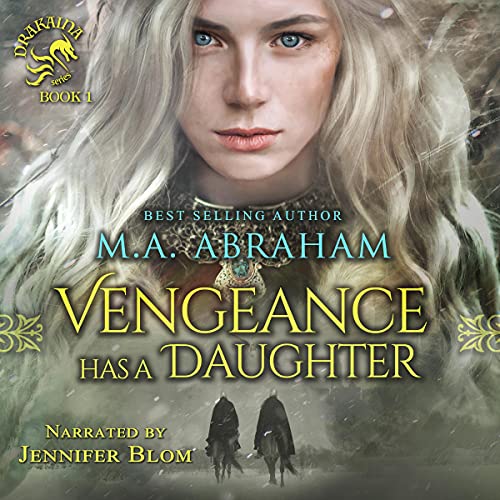 Vengeance Has a Daughter

She was born to right a wrong and to serve justice. Torn from her deceased mother’s womb, she knows what is expected of her even before she takes her first breath. Her quest for vengeance starts as a child, and determined to see her task to the end, she acts as opportunities present themselves. She is Naranda, daughter of Mysteria and Trance, last of the royal line of Dragon.

Strafe is the strongest of the Drakes, the bravest and the one everyone looks toward to rebuild their empire. To do this, he brings Ranish to his side to advise him, for he was closest to the throne before the royal line was decimated. With Ranish comes news of a hidden daughter of the House of Dragon, and Drakaina hiding from both man and beast to stay safe. In helping Ranish to find his niece, Strafe becomes guardian to hundreds of orphaned Drakaina that only reluctantly pay him homage. To them, Naranda is their beloved queen, for she alone is of royal blood.

In a bid to strengthen the power of the throne and, to do the right thing, Ranish hopes to bring these two powerful dragon-shifters together to create a lasting dynasty. Can he do it? Will they take one look at each other and see only an enemy? Or, will they find a love that has been missing in their lives since the days when Mysteria and Trance lit up the skies with theirs?

What listeners say about Vengeance Has a Daughter

This was a fantastic journey of vengeance, an amazing amount of detailing and pleanty of depth, the character progression is spot on. The story quickly drew me in, such a fascinating concept. The book is very well written and nicely paced, I was completely captivated and couldn't stop listening.
The narration is spot on, really bring everything to life, giving each character an air of believability and an individuality. a definite winning combination of author and narrator.

I really enjoyed this book! The characters were so realistic and I felt like I was in the story. Kaina is down to Earth, kind and strong. Even after finding out she's royalty, she still does what needs to be done to avenge her family and people. While I always need my HEA, I'm glad this story focused on Kaina and her life. I eagerly await the next book! Jennifer did an awesome job with her narrative!

Vengeance was a great book to read and to listen to it being narrated was just awesome. Jennifer was a great choice of narrator's.

This book started with severe tragedy. I was not sure if this was a book I could read. I found this book captivating from beginning to end. I am glad I got to listen to this book because it was lengthy. The narrator, Jennifer Blom did an excellent job of voicing this story. The main heroine is strong, intelligent and focused. She gave up pursuing her mate in order to serve justice for the death of her family and many others. I highly recommend this book!!