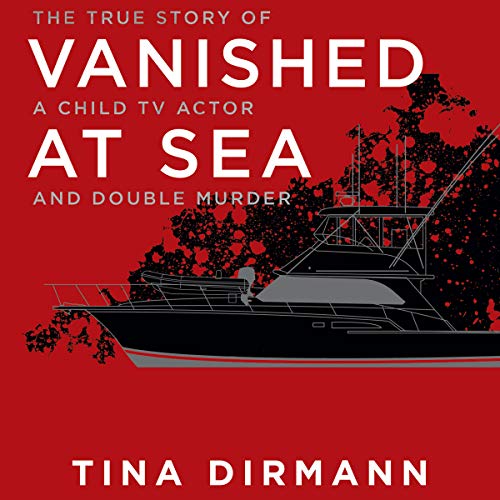 The True Story of a Child TV Actor and Double Murder
By: Tina Dirmann
Narrated by: Tanya Eby
Length: 7 hrs and 34 mins
Categories: Non-fiction, True Crime
5 out of 5 stars 5.0 (1 rating)

Thomas and Jackie Hawks had big plans. The couple wanted to sell their retirement home - a hard-earned 55-foot yacht named Well Deserved - and move onto land to spend more time with family. So when a baby-faced buyer, Skylar Deleon, wanted to test drive the yacht, the Hawks were overjoyed. However, Skylar - with his troubled past as a flamed-out childhood actor, a dishonorably discharged Marine and a suspect in the mysterious death of his former friend, Jon Jarvi - had an even more troubling future planned. But as the Hawks set sail with Skylar and two of his friends, not everyone will return.

A compelling true crime, Vanished at Sea is a murder mystery that starts as a missing persons' case and quickly evolves into homicide. In chilling detail, the book recounts Tom and Jackie's deadly voyage, when they begged for their lives before coldly being chained to an anchor and kicked overboard, to their deaths.

Authorities are left to figure out how this much-loved retired couple simply disappeared. Could the ship's new owner, Skylar Deleon, be responsible? And is his young, pregnant wife, Jennifer, involved? With little physical evidence to go on, the police, prosecutor, and Hawks family struggle to find out the truth. It's a heart-stopping, pause-resisting account of the Hawks family's search for justice. This updated edition includes new details on the crime, convictions - and surprising new evidence on the perverted sexual motivation that may have been behind it all.

Interesting all the way through

The only complaint I have is that wanted more. The narrative flowed well seamlessly adding in detail and backstory. There were no lulls, no parts that dragged. I love lots of intricate detail, and I could have used more in this book. However, a good amount of detail about the backgrounds of all the main players and their actions was present.

This narrator has grown on me over time. I used to think her voice carried too much tension. Now I appreciate more her inflection and seriousness that her reading lends to a serious topic.

I already knew most of the story, but it was enjoyable for being a smooth, well-written and well-narrated, read. I personally hope Skylar and Jennifer are waterboarded hourly, for the remainder of their miserable lives.

Loved everything about this book. It captured my interest immediately and the held it until the very last page. If you like true crime stories, this is a must read!

very engaging book, type of book you want to keep listening to til the end!