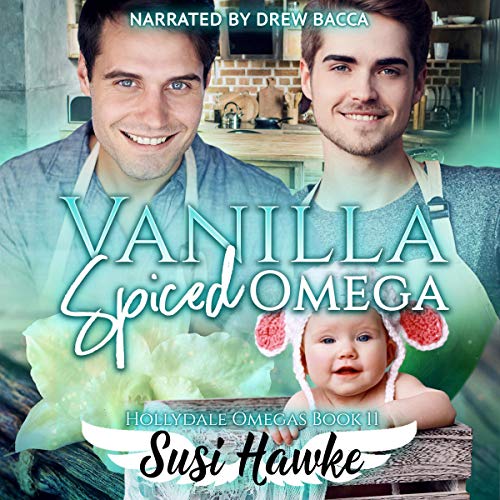 "Shane is my stepbrother; he's family and strictly off-limits."

Shane Prescott is a fun-loving omega with a knack for landing in trouble. He prides himself on efficiently running the waitstaff at his brother’s restaurant, Kamasouptra. Between his brother-slash-bestie, Keith, and his dog, Rocky, Shane doesn’t need anything else to make him happy. Love would be nice, but that ship sailed the day his mom married Keith’s dad.

Keith Anderson is focused on two things: Making Kamasouptra the premiere place to dine in Hollydale and not giving into his feelings for his stepbrother. For the past several years, his life has been running smoothly to the point of being in rut. Keith’s life begins to change when an offbeat old lady befriends him and starts to make Keith think that it’s time to alpha up and chase what he really wants.

Between a smarmy food critic, April Fools pranks gone wrong, and two helpful old coots who dispense their unsolicited folksy wisdom to the brothers - you’ll be in stitches as you root for a pair of men who are so busy trying to follow societal expectations that they’re oblivious to the clear signs that maybe...just maybe...they were never meant to have a brotherly relationship in the first place. Things are about to change in major ways for this pair of stepbrothers, if they can just be brave enough to take a chance for happiness.

Return to the world of Hollydale with a quirky romance full of all the fluffy feels that you’d expect from a Hollydale novella. This is the 11th book of The Hollydale Omegas series but is absolutely able to be listened as a standalone. This novella definitely contains an HEA. 18+ listeners only please! And yes, this audiobook contains M/PREG, adults adulting in sexy grown-up ways, and way more than an occasional use of potty mouth language.

I love the Hollydale Omegas series by Susi Hawke and Drew Bacca always does such a wonderful job of bring these kooky, fun, crazy characters to life.
This instalment is about the stepbrothers Shane and Keith who work together at their own restaurant called Karmasouptra. With an April Fools' prank that goes horribly awry when Restaurant reviewer Jordan becomes the unfortunate victim, leading to a date for him with the omega Shane, things just go from bad to complicated.
Can the two find their shot at happiness with a little help from a pair of interfering old coots? Highly recommended MPreg non-shifter Alpha/Omega romance.

Vanilla Spiced Omega is the 11th book in The Hollydale Omegas serie by Susi Hawke. I really liked the story of Shane and Keith.

The performance was good but not amazing. Sometimes I had a little trouble following it. But overall I really liked it

This series is one of my absolute favorites and this book is a perfect example why! The characters are fun and the chemistry between them is outstanding. The plot is entertaining and all that combined with a little heat makes for a great read!
Drew Becca does such a great job with the narration, making it an easy and enjoyable listen!

Great addition to the series.
Really sweet romance with plenty of pranks and hijinks providing comedic relief and of course some interfering, um helpful ghostly assistance.
Drew Bacca of course has put his magic touch on the narration and brought these lovely and engaging characters to life.

This is the 11th installment in the Hollydale Omegas series, you don't need to have read them all, although for maximum enjoyment, it might be best if you've read at least a few of the previous books. But if you prefer to read it as a standalone, all you need to know is that they're all sweet, fun, hot books with a paranormal twist to them.

Shane and Keith are stepbrothers, although, their parents only got together when they were in college, so they didn't really grow up together as such and even if they had, they're not blood-related so it's pretty much a non-issue. They've also been friends since they were very young and had been on the verge of making a go at things before their parents decided to marry, which put a stop to anything happening between them back then. Now, years later, they're both working to achieve their dreams at Kamasouptra, with Keith as the chef/owner and Shane as the head waiter and in charge of making things run smoothly at the restaurant. It isn't until Shane starts thinking about dating that Keith starts thinking that he doesn't want to lose his chance with Shane, but is it too late now?

Okay, so I liked Shane a lot, but I wasn't too sure about Keith, especially after the radio silence after their first night together. I wanted to slap him silly and ask what the hell was he playing at. *sighs* Thankfully, they moved past that once they sit down with their parents and had an honest talk with them and things got so much better. Shane and Keith had chemistry and I loved their banter, but I kind of missed the being drawn to their scent element that had been prevalent in previous installments.

Anyway, this was a fun read, and a great narration by Drew Bacca, who's been doing a fantastic job with the series. So, even if it's not my favorite, it was still a good addition to the series and I have no trouble recommending it.
.

We are back in Hollydale! This time it's Keith's and Shane's story. Keith and Shane are funny, lighthearted, mischievous characters who knows how to pull a great prank! Seriously I couldn't recommend this listen enough!

Once again, we head to Hollydale for some more antics. I found Shane and Keith to be full of humor and enjoyable. Hawke's Hollydale Series in general is fun, but these two take it to another level. I really enjoyed Bacca's narration and his capabilities to draw a listener in.

A wonderful addition to the series!

In my opinión this is one of the best series ever written in Mpreg. So this new audio addition is a must have for any fan or just for anyone who wants to read a sweet romance with a nice HEA and a little supernatural wink. Now this amazing book needed a great reader and Drew Bacca was a perfect fit, his energy and charism helped him to create Keith and Shane's voices and characters just like I imagined theirs could be. Simply wonderful!

This is a fun and sweet story of friends turned step brothers finally getting together. Brilliant narrator on bringing the story to life.

Shane enjoys his life and loves pranks, especially April Fool's. Well, this time, his prank doesn't go correctly and it could cost Keith so much. Keith worries about what will happen after the April Fool's prank goes wrong but can't hold too much anger towards Shane. These two have a history that will be revealed even as they insist that they are family. With the help of some offbeat senior citizens, hopefully Shane and Keith will see what so many others already know. They belong together.

Drew Bacca does an amazing job bringing everything to life and you will find yourself snickering at times.

Drew Bacca did another great performance. I really like the step brothers aspect. The April fools pranks and shenanigans were so funny. Another great book by Susie Hawke.

I was excited for their story and not at all disappointed. Drew, as always, came through.

This is my favorite series. Its my go to for light and fluffy and the narration fits the characters,they come to life and the food puns is funny too.

Enjoyed this short novella from the Hollydale series from Susi Hawke. It was fun and low angst...just a feel good kind of book. I enjoyed Drew Bacca's narration quite a bit!

Bacca for the win!

A sassy omega and a oblivious alpha who were stepbrothers but become lovers. (Not that kind of story lol) it was fun to hear the way their story was told. I absolutely enjoyed the narrator as per usual, I laughed plenty!

This was a funny, cute , enjoyable audiobook. Very well written and I love this series cant wait to listen to the others !

This book can absolutely be listened to as a standalone but reading or listening to the other books in the series will make it even better.

Keith and Shane are best friends who want to be more but both find it difficult since their parents married each other years ago. Shane's a spitfire of an omega that doesn't take crap from anyone while Keith is a more down-to-earth alpha than most. Thankfully, they both have someone that shows up to help guide them in getting what and who they want.

As always, Drew has done a great job in keeping Hollydale a fun place to visit.

it is so worth it

So cute! I laughed and enjoyed every minute of this book! Pranks and fun mixed with sexy times. I love that the "ghosts" pushed them together.

Listen to your elders

As a 60 year old romance fan, I love it when the two main characters are "helped" along to their HEA by charming, older characters. This book gave me that in spades! This is a lovely, feel good book for an afternoon when you need a pick-me-up after a long day. The characters of all ages are beautifully written and brought to life by Drew Bacca, there is humor and great romance with a very low angst factor, the restaurant setting is nicely developed and there are all those great secondary characters to help/push our guys to their HEA. This is one I am leaving on my device for a listen whenever I want to feel better.