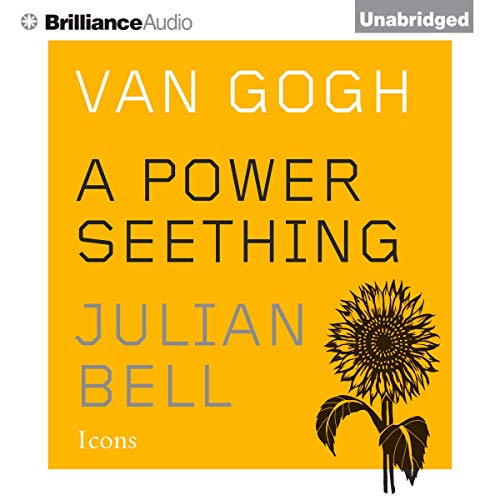 By: Julian Bell
Narrated by: Grover Gardner
Try for £0.00

A passionate account of the tortured life and tragic death of the greatest artist of the nineteenth century, by renowned critic and painter Julian Bell.

Van Gogh is a vivid portrait of the great Impressionist painter that traces his life from the Netherlands, where he was born into a family of art dealers, through his years in England, the Hague, and Paris, to his final home in Arles, where he discovered the luminous style of his late paintings before his suicide at the age of thirty-seven.

Van Gogh struggled to find his way as an artist: Well into his mid-twenties he had achieved virtually nothing except a few charcoal drawings of coal miners. Afflicted by mental illness and a mercurial temper, he was institutionalized several times toward the end of his life. Julian Bell conveys this tragic story with great compassion, depicting van Gogh in all his anguished vigor, a genius for whom the greatest challenge was to stay alive until he had completed his most fully realized and magnificent works.

What listeners say about Van Gogh: A Power Seething: Icons

cellent, fully rounded portrayal of a great but deeply disturbed artist. Great performance. if you have time this book is well worth a listen.

Vincent Rises Above Yet Another Biographer

This short biography of Vincent Van Gogh does not have the courage of its own convictions, or rather, never settles on its attitude toward its subject. At the beginning of the book, the author assures the reader that old fashioned and outdated hero worship simply won’t do. We are all, he suggests, too well informed about the seedy under belly of Van Gogh’s career to fall into such a naive trap. But throwing shade on such a publicly beloved and enormously productive artist soon becomes, he seems to feel, a bit unseemly. By the end of the book, in the face of Van Gogh’s clearly heroic creativity despite so much personal suffering, the author can’t quite sustain the irony of his opening declaration. Van Gogh’s masterpieces speak for themselves, above, so to speak, the ironic harrumph of his biographer. It’s a useful little book, I suppose, a salutary corrective for the impressionable young who uncritically romanticize Van Gogh’s achievement. A great book would have more squarely faced this tension between the demystification and the mystery of Van Gogh’s creative genius.