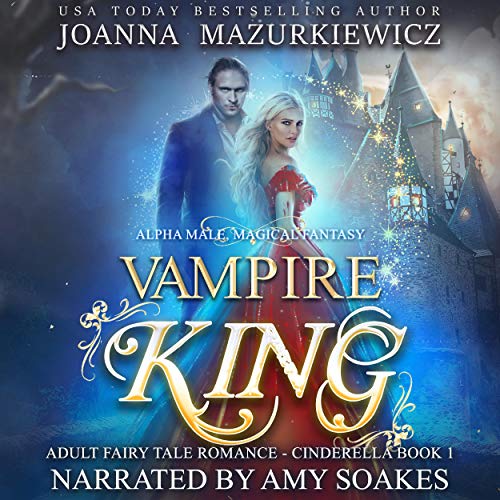 By: Joanna Mazurkiewicz
Narrated by: Amy Soakes
Try for £0.00

In a kingdom ruled by a vampire, royal blood doesn’t mean what it used to - and fairy tales don’t always have happy endings.

To wrest her inheritance from her evil stepmother, Cindy must marry a respectable man before she turns 25. The upcoming royal ball is the perfect place to find one - with the help of a fairy godmother. Or at least, a drunken prostitute with some magical skills.

At the ball, though, King Caspian sets his sights on her. It’s not like Cindy doesn’t know better - but surely no one’s more respectable than a king. So really, what does she have to lose?

Everything, as it turns out. Because the king isn’t human at all, but a monster who’s hellbent on having Cindy in his bed again.

If only he can track her down.

Listen to this steamy, sexy, adult retelling of Cinderella with a vampire twist!

What listeners say about Vampire King

This is a real shame. I’m sure the story would have been wonderful and I really looked forward to listening to it but the narration!!! There is no way I can possibly listen to the worst narration ever! If it had been a children’s story the narrator would have been ok but definitely not for this.
Sorry Joanna I was really looking forward to the book.

Wow this was terrible on every level. The story was ridiculous the character dynamics between Cinderella and the step mother were weird and nonsensical.

The narrator sounded like she was complaining the ENTIRE time. She was nasal and spoke with the winy tone that was unbearable.

Really enjoyed the narrator and her voice for her “godmother,” she did a good job with all the voices.

Can’t wait to hear more of the series!

to be honest, I don't leave many reviews, but this one I just couldnt stay silent.
the story itself was fine. typical fairytale. angst.

but that narrator should have been fired the moment she opened her mouth!
I have NEVER heard anything so nasally, pouty, and ANOYING as this one. I was literally CRINGING throughout the whole book.

Adult retelling of Cinderella with a PNR twist

This has to be one of my new favorite fairy tale retellings. It's Cinderella for adult paranormal romance fans. And I loved every minute of it. It had me consumed from the first line to the last. I was instantly connected to Cindy and I wanted all who did her wrong to pay. This was a great story about how life can be unfair, but we all have choices to make. It was an epic love story. Who doesn't wanna fall for a vampire king? Talk about silver fox! And if you want steamy romance, you got it! And this was a story about revenge. Not giving away those details. Just know your blood will be boiling and you'll be demanding justice yourself. I love that it's a series. I definitely want more. This narrator did a great job. Her voice matched the fairy tale essence of the story. A must read/listen for paranormal romance fans.

For my very first audible book I’m really glad this was my first pick. I loved the fairy tale spin on it. Very detailed. Great narration. I will definitely be listening to more from this author and hoping the other stories live up to this since I finished it in one day.

The writing and story just didn’t flow. Did not finish. I stopped listening in chapter 5.

A different spin on a Cinderella story. this can be can be read by young adults.

I am not sure if it was the annoying over the top accents or the easy to predict storyline but I wish I would have spent my money on another book. I laughed my way through the "intimate" scenes because the characters voices were so bad.

For my first audible book, I found having one person narrating for all characters is very disappointing. storyline ok but wasn't able to connect with the H/h.

ok I love this I bought the e book bundle and well dang this audio is fabulous! the narrator is phenomenal and so glad I got a copy!!