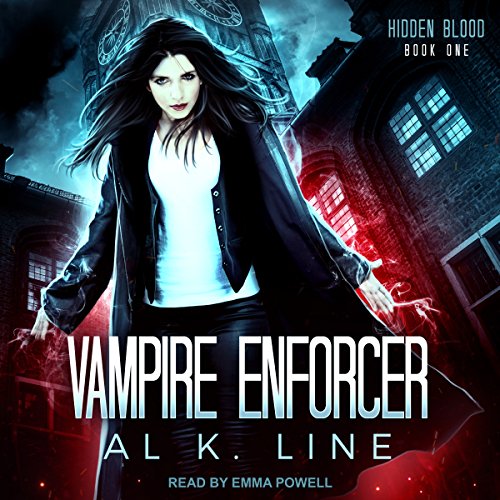 The phone rang, and like a fool I answered. Mistake number one. Then I agreed to do a job for the Hidden Council. Definitely mistake number two.

Now I've lost count of my bad choices, same as I have the bodies, as they're piling up faster than a troll after free chalk.

As I get to grips with this new magic I've been gifted, the city remains under a spell of violence, and it's down to yours truly to deal with it. But I'm a noob at this job, ill-prepared and with my own personal demons to fight.

My hunger is taking hold as the vampire nature encroaches, the need to feed impossible to resist, and my inherited magic is so volatile it's practically splitting me apart. Nevertheless, blood is being spilled and heads are getting cracked, so I must be doing something right.

I'm Kate. First Vampire Enforcer. I think I might actually be good at this.

What listeners say about Vampire Enforcer

Kate history - We met Kate in, Black Spark: Dark Magic Enforcer Series, Book 1, by Al K. Line. Kate was a new vampire. She met Faz when he arrived to kill her maker. She was already bitten. Kate’s plotline in the series is to hold on to her humanity as tightly as she can. Her and Faz developed a relationship and are eventually married.

Now Kate has her own series. Her story takes place in the same Welsh community of Cardiff in the Dark Enforcer series. You don’t need to be familiar with that series to enjoy this story. The characters of Dancer, Intus the imps, Madge of Madge’s Café and others are consistent with those in the Dark Enforcer.

This story picked up after the honeymooners return home. Fiz is recuperating from his use of magic. Kate now wields the Empty, is still a vampire and a witch. I do not recall where so got her witching abilities, but hey. It is hinted, that the change in their magic abilities is due to their desire to become parents. There must be magic somewhere if a vampire expects to become pregnant.

Kate has been home a day before Dancer recruits her to become an enforcer. The discrepancy I find is her lack of skill. Faz was training her in using magic. If you are a Dark Enforcer reader, you know that Faz kept Kate out of all the action. That was primarily so she did not have to use her vampire abilities and descends in the vampire madness.

Having magic does not equate to having fighting skills, that has been slightly overlooked. So how does she have any combat strategy? In addition, where you return from an assignment with important intelligence to report, you do not go home for coffee, shower and cuddle.

I was amused to the effort Kate put into pick out her enforcer outfit. Spark talked about Mithnite and his gang in an earlier story. When they were kids, and they wore dusters and such to imitate how they thought a magician user should dress. Kate did not get that memo. She donned a letter coat. Think of the drag when you are surrounded with foes and you are turning in a circle to fight you way out. Everything on the Matrix was not combat friendly.

This was good story to give us something familiar with the world of the Dark Enforcer and to give Kate her spin off. She is a credible kick ass heroine but she does have some growing to do. I question how she burns so much magic and never in the story did she need blood. She went to the fires of hell and back. She had a total regeneration. She did not refuel. She immediately went to fight in the final battle. She craved a hot dog but that will happen when you are at a fair.

Dancer must become strategically savvy. To avoid a similar blow back from the High Council that happened in New Spark, Dancer’s decision left to much collateral damage.

It is good that this story. It is set in the United Kingdom. If it was in the United States, with our NRA laws, the fairgrounds would have been running red with blood.

Enjoy the story. If you have not read it, check out the Dark Enforcer series.

Hey, where is the great British accent that Gildart Jackson brought to the Dark Enforcer series. That gave the story the feeling of being in the UK.

Too much detail moves slowly. Voice grates over the length of the book which adds to the drag.

Seem to be running out of juice. Maybe need to recharge your battery. Sorry just had to say it.