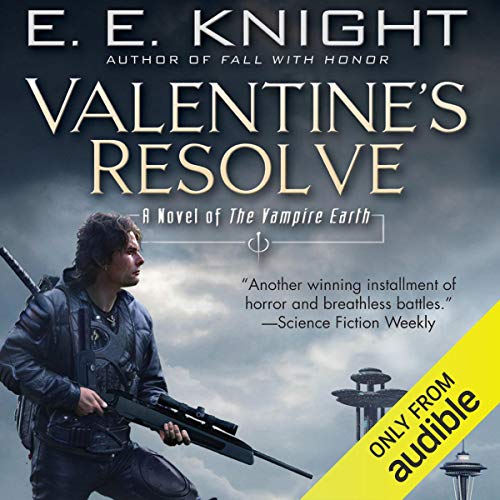 The Vampire Earth novels are "character-driven speculative fiction adventure at its very best ." Now national best-selling author E. E. Knight continues the thrilling journey of David Valentine, a man trying to survive in a New Order run by the alien Kurians and built on the harvesting of enslaved human souls.

It has been three years since David Valentine's forced exile from his friends and allies in the war against the Kurians. But that hasn't stopped him from fighting his own battles and his personal demons. Brought back into the fold by his old teacher, Duvalier, Valentine discovers that the Lightweavers, Earth's allied in the conflict, have all but vanished. Without their aid, mankind cannot possibly stand against the Reapers and other life-forms the Kurians use to subjugate the planet.

Many of the Lightweavers are held captive by the Seattle overlord, a powerful Kurian who commands dozens of sublords in his thrall. To free them, Valentine must trek across the Cascades and convince Adler, a legendary resistance fighter with a grudge against the Seattle Kurians, to join his cause. But Adler is something of an overlord himself, ruling his men with an iron fist and giving Valentine a new enemy to fight....

This title is part of our Vampire Collection, a selection of our favourite dark listens.
©2007 Eric Frisch (P)2008 Audible, Inc.