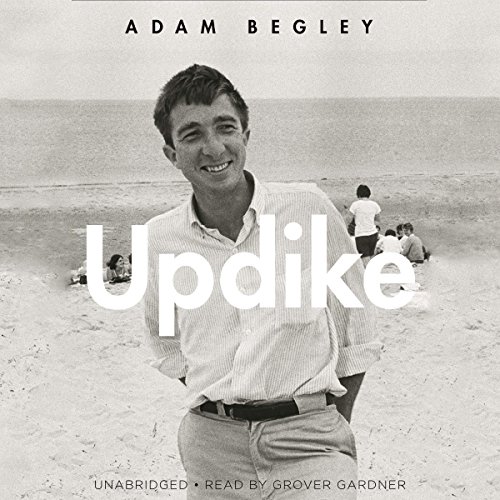 By: Adam Begley
Narrated by: Grover Gardner
Try for £0.00

A masterful, much-anticipated biography of one of the most celebrated figures in American literature: Pulitzer Prize-winning author John Updike - a candid, intimate, and richly detailed look at his life and work.

In this magisterial biography, Adam Begley offers an illuminating portrait of John Updike, the acclaimed novelist, poet, short-story writer, and critic who saw himself as a literary spy in small-town and suburban America, who dedicated himself to the task of transcribing "middleness with all its grits, bumps, and anonymities."

Updike explores the stages of the writer's pilgrim's progress: his beloved home turf of Berks County, Pennsylvania; his escape to Harvard; his brief, busy working life as the golden boy at the New Yorker; his family years in suburban Ipswich, Massachusetts; his extensive travel abroad; and his retreat to another Massachusetts town, Beverly Farms, where he remained until his death in 2009. Drawing from in-depth research as well as interviews with the writer's colleagues, friends, and family, Begley explores how Updike's fiction was shaped by his tumultuous personal life - including his enduring religious faith, his two marriages, and his firsthand experience of the "adulterous society" he was credited with exposing in the best-selling Couples.

With a sharp critical sensibility that lends depth and originality to his analysis, Begley probes Updike's best-loved works - from Pigeon Feathers to The Witches of Eastwick to the Rabbit tetralogy - and reveals a surprising and deeply complex character fraught with contradictions: a kind man with a vicious wit, a gregarious charmer who was ruthlessly competitive, a private person compelled to spill his secrets on the printed page. Updike offers an admiring yet balanced look at this national treasure, a master whose writing continues to resonate like no one else's.

What listeners say about Updike

Waspish about the Eastwick WASP?

This is an extremely well put together literary biography, entirely in keeping with the way in which John Updike himself created and committed his life to the written word. Initially, its important to ensure that a life-long enjoyment of John Updike’s fiction is not simply put to the test of John Updike’s fact. Reassuringly, the question marks are explicated before the method is laid out. Updike’s reserve and modest hesitance has to be a mask, hasn’t it? Well, it was and wasn’t.

Similarly, the whiff of the misogynist odors the œuvre, meaning that an unquestioning, unstinting admiration for the middle-cycle, middle class novels can’t really be good form - can it?

What is the real excitement early on is the revelation that biography is the salt and pepper of all of short stories, novels and countless light verse and longer poems that Updike wrote. With a masterly knowledge of all of the works, Adam Begley is able to weave the biography into a detailed review of each of the works - with both aspects given equal weight and delivered with unqualified success.

In then surveying the whole - life and work - Begley is admirably non-judgmental, but left me with enough of the facts on which to make up my own mind. I’m sure that this will also be the case for anyone who attempts to follow the full course of Begley’s work. A novel approach to the literary biography and the best that I’ve read since Richard Ellmann’s ‘James Joyce.’

In reconnecting with John Updike’s fiction, I felt that my reading of this biography benefitted enormously from the early work put in on the Rabbit books, all of which I borrowed from the public library in Stradbally, Co. Waterford and read contemporaneously on holiday prior to the publication of Rabbit is Rich (1981) and then Rabbit at Rest (1990). Forgotten sojourns in Roger’s Theory (1986) and S (1988) came flooding back and a more orderly reading of the short stories which I soldiered through academically was rounded off by a more recent familiarity with the many New Yorker articles and Seek My Face. It was helpful to have this as the departure point - although, I’m not sure that any reader who is not already an enthusiast would pick up Updike.

I’ve always found Updike’s prosaic spirituality something that I was happy to find reflection in. He asserted, near death, that most individuals find their experience of earthly paradise is gifted in the earliest years, not something that they have grafted on as a result of time spent achieving - and I’ve found that to be confirmed by those around people in my life who have passed.

Rather satirist than misogynist, emphasising family in the face of bald adultery, self-serving whilst a little too anxious to please, defensive in the face of received uninformed opinions - all holes in the hagiography are threaded and bared with the biographer’s skill. What remains is substantial and worthy - long may he rest.

Giving Updike his beautiful due

A must read for Updike fans. Adam Begley has done a fine job of a biography of a man who documented his own life compulsively. It's a fair and clear eyed appraisal of Updike, full of close readings of his work and of the effect his writing had on his own family. It is best about the first half of Updike's life - it seems his second wife guarded access to him for the last 25 years or so. It seems fair on his shortcomings whilst defending him from some unfair criticism. Begley is particularly good at deconstructing the public 'man of letters' persona to give an insight to the man himself. Makes me want to re-read the novels. Looking forward to listening to the Rabbit series this August.

Literary biography at its best

You don't have to be particularly interested in Updikes work to enjoy this. The writing is elegant, and thoughtful, without the usual plodding quality of many literary biographies.

as an Updike fan... it's hard to offer an unbiased opinion ....however I don't think any rational person would expect one from a fans review. i found it all so interesting. ...and much like his novels...i wanted it to go on and on...make it last...and it did. very detailed. ..very informative. ..very long. and...for that...i am most grateful. I would suggest anyone thinking of emersing yourself into the wonderful world of John Updike to use this as an owners manual of Updike....as for me....i immediately tried to read 2-3 updike novels at the same time...may long lost eagerness returned ...much like my innocence....and it was a welcomed , lost old friend. i cant imagine a greater joy then your first jobn updike novel.

Well read by Grover Gardner (I played it at 1.1 speed to avoid the sententious tone that sometimes creeps into Gardner’s reading). And don’t worry — Gardner avoids those mispronunciations of names that are the bane of so many Audible listeners.

Begley takes us through Updike’s fascinating but frustrating trajectory — with Updike elegiac and nostalgic about his own life even as a young man. By the time he was middle aged, it had become almost his shtick.

This biography came out in 2014 — I think if it were published now, Adam Begley would probably turn a more critical eye to — yes — the white supremacy built into Updike and his craft. For Updike, the 1950s were the golden time and the beautiful young Ipswich families, white and Christian and well-educated, the golden people. No other world seemed to come close.

Updike’s skills as a writer were almost incomparable. He really was a kind of Dutch Master who captured that world and those scenes at the breakfast table thrillingly and movingly “just as it was.”

But when he was forced to turn away from his domestic life as source material with his second marriage, his writing seemed to plunge in terms of using his skills to touch on greatness.

With astonishing sense of entitlement, Updike wrote books set in Africa and Brazil after a few weeks’ visit. And though he included an extremist Black character at the heart of Rabbit Redux, Updike’s personal life makes you wonder if he ever actually spoke with a Black person at any length or depth more than once or twice. His representation of characters of color doesn’t refute this impression.

This biography left me sad and thinking hard — and left me very appreciative of the clear, well-organized writing of his biographer and how well the narrator read it.

A beautiful, thoughtful tribute to a great American writer.

Wonderful. Begley does justice, as few if any could, to his subject. I would give this book five stars.