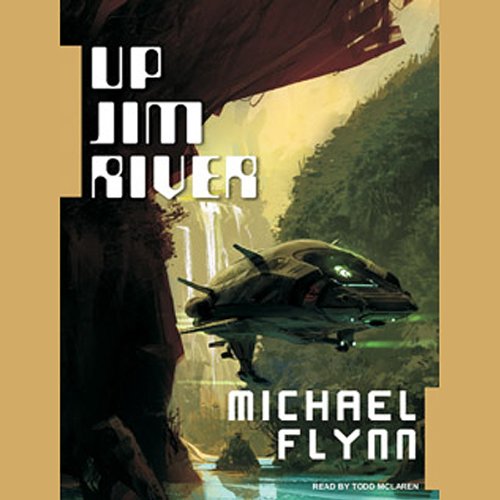 By: Michael Flynn
Narrated by: Todd McLaren
Try for £0.00

There is a river on Dangchao Waypoint, a small world out beyond Die Bold. It is a longish river as such things go, with a multitude of bayous and rapids and waterfalls, and it runs through many a strange and hostile country. Going up it, you can lose everything. Going up it, you can find anything.

The Hound Bridget ban has vanished, and her employer, the Kennel (the mysterious superspy agency of the League), has given up the search. But her daughter, the harper Mearana, has not.

She enlists the scarred man, Donovan, to aid her in her search. With the reluctant assent and financial aid of the Kennel, they set forth. Bridget ban was following hints of an artifact that would "protect the League from the Confederacy for aye." Mearana is eager to follow that trail, but Donovan is reluctant, because whatever is at the end of it made a Hound disappear. What it would do to a harper and a drunk is far too easy to imagine.

Donovan's mind had been shattered by Those of Name, the rulers of the Confederacy, and no fewer than seven quarreling personalities now inhabit his skull. How can he hope to see Mearana through safely?

Together, they follow Bridget ban's trail to the raw worlds of the frontier, edging ever closer to the uncivilized and barbarian planets of the Wild.

What listeners say about Up Jim River

Heart of Darkness in the spiral arm

Flynn's follow-on installment to January Dancer (it's not a true sequel, since the story is new) is another winner. Not only is there the Dancer universe, but many of the same characters are back. For this outing, the scarred man and the harper go in search of Bridget Ban (the harper's mother). Bridget has been missing for a while and even the Kennel has let the case go cold. Their journey takes them further and further out into the spiral arm with successively more primitive enclaves of the human diaspora. Along the way, Flynn weaves a tapestry of oddball cultures resulting from the distillation and degradation of various Earth histories, ideologies, and mythologies.

Flynn has basically crafted a sci-fi version of Conrad's Heart of Darkness (Apocalypse Now is the movie version). The mish-mash of various earth cultures and languages makes for fascinating and compelling storytelling. In addition, while everyone is focused on the presumed "great weapon" that Bridget Ban was supposedly on the trail to find, the ending while somewhat anticipated, is nevertheless satisfying.

The narration is quite well rendered especially given the huge demands due to the nature of the tale. In particular, the scarred man exhibits multiple personalities, each with their own unique vocal styles. In addition, the language structure which is largely a bastardization of normal language requires close attention.

The audio track should be seamless and only make a pause when there is a new chapter or other major change of action of view. It it incredibly distracting to have the track skip at the end of every single page. I listen on Samsung S5.

The story is wonderful as is the entire series. It is a technical issue and not a performance issue.

Would you be willing to try another one of Todd McLaren’s performances?

Not up to Stephan Rudnicki in The January Dancer, but very good. At first it seems that he is reading very slowly and that is distracting.

I am not the only user experiencing this problem, there is an entire thread on the Kindle forum devoted to this skipping issue. Amazon and Kindle need to fix this.

"Up Jim River" is a sequel to "The January Dancer" and there are two more installments in the Spiral Arm series. I'm still having trouble trying to grasp to the story. The story is long and tedious. It's not an easy book to read after you had a long day. In order to be fully immersed to the space opera, you need to read this book into different segments, where you need to take a breather in between the pages. It's not like running a marathon, where you can sprint to the finish.

Flynn writes in depth of the storytelling, where I hit the wall many times and needed to be distracted. I will eventually finish this series, but there is no rush. I'm not really into space opera as I should be, but I really like science fiction. Flynn's direction for this series is somewhat tiring, but I also want to know how everything ends. I'm hoping for less storytelling and more plot and action.

My review of Up Jim River would had been more favorable if I had read something different after The January Dancer. The series is still not there for me to look forward to "In the Lion's Mouth." I need to read something else before finding my devotion at finishing the series.