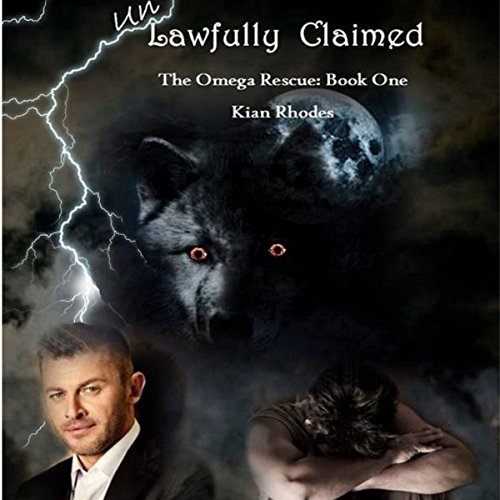 By: Kian Rhodes
Narrated by: Alexander Collins
Try for £0.00

Thane was an Omega with a very dark secret, trying to break free from an unpleasant past when he was hired as a paralegal in the local shifter law firm.

Alpha Haldrian Christof, Drey to his friends, was one of the few local attorneys specializing in shifter law. His first attempt at claiming an Omega, a visit to the Omega auction, had ultimately failed. That didn't stop him from falling for his new paralegal, a kidnapping victim with soft blond curls and entrancing blue eyes.

When Thane's past catches up with him, will Drey be able to protect him or will his Omega be deemed unlawfully claimed?

The Omega Rescue series tells the stories of Omegas who were rescued in The Omega Auction book two, Buyer Beware.

What listeners say about Unlawfully Claimed

Where does Unlawfully Claimed rank among all the audiobooks you’ve listened to so far?

Unlawfully Claimed is one of my favorite books, Kian Rhodes I have read all of this authors books,

What was one of the most memorable moments of Unlawfully Claimed?

Thane is an omega and Drey is an Alpha both unclaimed, to me the best part of listening to this book, was how old characters worked together for and at the court hearing.

I have said this before on Kian Rhodes audibles Alexander Collin's is really great with all the characters, believe there are a lot.

I did sit and listen to this book in one sitting awesomely good.

Outstanding, wonderfully written, great story about how Thane is still unclaimed, if he was supposed to be mated to an Alpha that's ready to rent him out.

Alexander Collins has portrayed Thane's expressions so well, I enjoyed listening to his smooth voice. Kian Rhodes has continued on from Book 3 The Mating Game, The Omega Auction into this one. Starting The Omega Rescue with Thane and Haldrian's story, and still including all the characters we loved from the earlier books. I think the story is well written and full of humour, while tugging at your heartstrings. I can put wait for the next audiobook as I already have the e-books and so I know they keep getting better!

Miscommunication is a lazy plot. I spent an hour absolutely fucking incensed by Drey being obnoxiously obtuse for way too long.
I was practically yelling "JUST TELL HIM ALREADY"

it is so worth it

I got about 5 minutes into this book so I can’t speak to the story line... so I’m giving that a 3 star review just because I have to put something.

I couldn’t stand the narration. Everything ends on an ‘up’ note and makes it sound like a question. Drove. Me. Crazy.

I wanted to leave another review. I reviewed the first book and really expressed my disappointment with the narration. This is the 4th book with the same narrator and I have to say he is improving. I thoroughly enjoyed all aspects of this book and will definitely be moving onto the next book!

This was a great book and definitely worth listening to. I loved the characters within it as well as the dynamic between the two main characters. Treating one another as equals in the world of omegas and alphas is rare and I enjoyed it. There were plenty of sexy scenes with a good story weaved throughout. Definitely worth a buy.

I was so glad to see that Thane and Drey get their chance. Thane has had to face so much more than we had even realized. Drey is such a wonderful caring man and always seem to be willing to put others first. I like how we get to see how resourceful and smart Thane is. Together they have a chance of a wonderful life working together to make it an even better world.

I didn't go into this with a lot of hope. I don't tend to enjoy the majority of omega stories. They just don't seem believable as individuals to me. This story, however, was very well done. Keeping within the constraints of the lore for omegas, we have an individual with self-determination. I found Thane to be charismatic and engaging. I'm now going to read the rest of the series to see if the author can keep up with this kind of nuanced character.

Forgetting that I had read the first story in this series, I was delighted to realize that this was a stand alone story. The story of Thane and Drey was a nice one. I enjoyed listening to the story presented. It was a nice way to be distracted for a few hours.