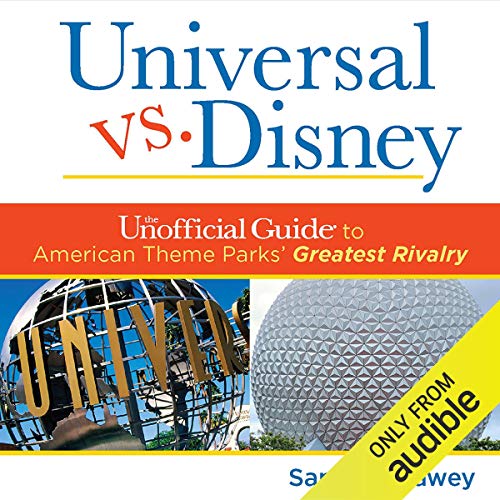 Universal Studios never really wanted to get into the theme park business. They wanted to be the anti-Disney. But when forced to do so, they did it in a big way. Despite the fits and starts of multiple owners, the parks have finally gained the momentum to mount a serious challenge to the Walt Disney Company. How did this happen? Who made it happen? What does this mean for the theme park industry? In Universal Versus Disney, his newest work to investigate the histories of America's favorite theme parks, seasoned Disney-author Sam Gennawey has thoroughly researched how Universal Studios shook up the multi-billion dollar theme park industry, one so long dominated by Walt Disney and his legacy.

What listeners say about Universal Versus Disney

A nice history of universal

I found this one really interesting as it goes right into the history of Universal Studios and it’s Hollywood and Florida parks. Don’t go in expecting much on Disney though, very little ‘VS’ goes on here. Also the narrator doesn’t pronounce some of the ip words correctly.

Although I enjoyed the book, this is more a history of Universal than about the rivalry with Disney. In fact they are mentioned only fleetingly throughout. Still enjoyed the story of the rise of Universal theme parks in Florida in particular.

Not much about Disney but loads on Universal

Small amount on the rivalry between Disney & Universal. Most of the book covers the history of Universal's theme parks with some really good information on how the parks evolved along with rides etc

I was originally excited to finally get this book but soon discovered that I was never going to be able to finish listening. Although I know my Disney and theme park history well and better than the average Joe, nothing I heard was anything new. The title wants you to believe that this is a Universal vs Disney book and that is NOT what it is at all. It should have been titled, "The History of Universal Studios" because 95% was about it. You rarely hear anything about Disney, and everything you do is already known. I am disappointed at the misleading title. Had I know this was going to be a book on the history of Universal Studios I would have not wasted my money...I guess I now know why they chose to go with this title. I do not recommend this book at all and it pains me to say that because I do like Sam Gennawey and his other books, specifically on EPCOT. This was a HUGE and boring let down for me and if you are reading this review I hope you don't make the same mistake that I did.

History of Universal(with some mentions of Disney)

This book was interesting and I learned a lot about Universal. However, the title is a bit misleading as there is really no rivalry discussed and 90% of the book is about Universal.
The audiobook production is rough. There are a few times where multiple takes of the same sentence are included as well as some questionable pronunciations.
Still, overall the audiobook was enjoyable and it is always nice to see more theme park books produced in audiobook form.

98%Universal, but still a good read

If your looking to learn about Disneyland, read Sam Gennawey's The Disneyland Story. This book is mostly about Universal and it touches on the rivalry between Disney. As it talks about the details of Universal and it's growth, it discusses what happened between Disney and Universal. The performance at times funny because of some poor pronunciation.

After trying to give this book a chance and listening for over an hour, I just couldn't get around the fact that this narrator's voice irritates me. His inflections and changes in tone don't seem to match up to the words that he's saying, as if he has absolutely no understanding of what he's reading.

I am a huge Disney fan and a fan of theme parks in general. I had hoped that after an hour of listening, the story would be gripping enough that I could get past the annoyances of the narrator's voice. But so far, it has felt like nothing more than a list of dates from the first half of the 20th century regarding how Universal Studios was formed. This one will likely sit unfinished in my Audible library.

While a facinating look at Universal history, it is almost exclusively about Universal's venture into theme parks. on the few occasions that Disney is brought up, its usually used to put context onto what Universal would do next, or to compare ride type and/or theming. The occasional mention of Eisner, Iger, or the imagineers is rare as Sam Gennawey mostly chronicles the corporate and partnership fluctuations of Universal.

While still a good read/listen, it would be much more appropriate to label this as a Universal parks history until 2012.

Love book, but narrator struggles with pronunciation. ok considering English is 2nd language for him.

My goodness, this guy has a tough time with pronunciation.

Please, isn't there an editor that is supposed stop this slaughter of pronunciation??? Great book otherwise.

Great for the history of Universal

Would you listen to Universal Versus Disney again? Why?

Yes. It tells the history of my favorite studio, Universal. Except I will have to prep my ears for Robert's mispronunciations throughout the recording.

I would not have misled the audience by having the title "Universal vs Disney" as the story skews heavily in Universal's favor.

Would you be willing to try another one of Robert Feifar’s performances?

No. He horribly mispronounces common words that everyone listening knows is pronounced a different way. It feels like he's from another country and learned English as a second language.

How Universal Studios took on the juggernaut of Walt Disney!

Have someone 'LISTEN' to this recording when it's done. No one from America could have possibly let certain words be pronounced the way Robert pronounced them. It makes you feel as if the producer of this recording could just care less. Here are some examples. The first is the actual word/name and the second is how you will hear Robert repeatedly say words. Trust me, it will drive you crazy.Industry (we say indusTREE) - Industry (He says in-DUS-tree) this is the most used and mispronounced word in the entire book, and he says it a lot! / Ivan Reitman - Ivan Reetman / Rosevelt - Roozavelt / Expletive - Expleetive / Hermione from Harry Potter (we all know it's Her-my-knee thanks to all the movies) - Robert says Her-MY-oh-knee (seriously...WHAT!)

is more Universal story than rivalry.

was informative. Universal needs to stop having Disney envy and focus on their own customers

Please Remain Seated At All Times

While the tittle stresses the rivalry between Disney and Universal this book is more a history of the Universal Theme Parks. Don't get me wrong as there is plenty of stories during the Disney CEO Eisner Era of the two companies battling it out. However the history and how many times the company changed hands is fascinating. if you are a fan of theme parks and like to look behind the curtain then this book is for you!