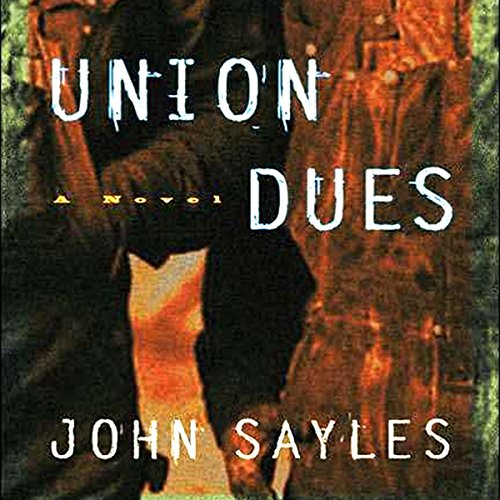 The setting is Boston, Fall of 1969. Radical groups plot revolution, runaway kids prowl the streets, cops are at their wits end, and work is hard to get, even for hookers. Hobie McNutt, a 17-year-old runaway from West Virginia drifts into a commune of young revolutionaries. It's a warm, dry place, and the girls are very available. But Hobie becomes involved in an increasingly vicious struggle for power in the group, and in the mounting violence of their political actions.

His father Hunter, who has been involved in a brave and dangerous campaign to unseat a corrupt union president in the coal miners union, leaves West Virginia to hunt for his runaway son. To make ends meet, he takes day-labor jobs in order to survive while searching for him. Living parallel lives, their destinies ultimately movingly collide in this sprawling classic of radicalism across the generations, in the vein of Pete Hamill, Jimmy Breslin, and Richard Price.

What listeners say about Union Dues

The Joys and Struggles of the Sixties

This is distinguished movie director John Sayles’ first novel— and it is wonderful.

Boston: Fall 1969. Revolution is in the air, and the streets are full of runaways. Hobie McNutt is a seventeen-year-old runner who drifts into a commune of young kids with subversion on their minds. The good times roll and there's plenty of action for everyone. Unbeknowst to son Hobie, his coal miner union leader father is searching for him, leaving West Virginia behind with the same oblivion as his progeny.

A boy's paradise can't last forever though, and a bare-knuckle struggle for power divides Hobie's collective. Their competition fuels a game of "playing chicken" with tactics that beg the question: is this what we mean by "any means necessary?" Will his comrades go the way of exiled Weathermen, desparacidos— or will things resolve in dignity, let alone sheer survival? How father and son finally collide will blow your mind.

If you've watched every movie John Sayles ever made... I sure have... this is a must.

Edoardo Balerini is the narrator of the year.

John Sayles wrote this book in 1977. For those of you who remember, he was a major figure on the political left in the 70s. He made several movies and wrote in several media. Union Dues is a story about a father and son. They live in the beginning in a small town in West Virginia, where the only industry at the time was coal mining. The setting was the time when unions were just getting involved, when black lung disease was first being recognized as the peril that we now know it to be. Hunter, the father, has two sons. The older, Darwin, joins the army and goes to Viet Nam. He comes back a "changed man." The younger son, Hobie, is the focus of the book. Hobie runs away from home and ends up in Boston, where he thinks his brother will be. Dar has left for Vermont, having essentially dropped out of society. The bulk of the story revolves around Hobie's activity in a political commune, and Hunt's attempt to find his son. Sayles's politics are long-winded and "leftie" in what now seems like a distant and very troubled time in this country. The book makes me think about what has happened during those past forty years. Both Hobie and Hunt live in poverty, and never truly find any work. The commune in which Hobie lives is full of windy, intellectual "radicals" who fight naive battles against overwhelming odds. However, it was these people, collectively, who pushed the country to pull out of Viet Nam, and who also pushed LBJ not to seek re-election. These events are not in the narration, but certainly inform the plot in a very dramatic fashion.
Edoardo Balerini has quickly become my favorite narrator, by some distance. If you have listened to Beautiful Ruins, you have heard his voice at its best. The Italian language just rolls off his tongue in a mellifluous, gorgeous way. In Union Dues he shows us that his range is much wider than simply Italian. He gives us wonderful dialects of English going from the hill country of West Virginia to the multiple mini-populations of Boston. There are so many voices here that I couldn't keep track of all of them, although I wouldn't try to do that, as it would have distracted me from Balerini's performance. The story wanders around, particularly in the second half, particularly where the factions of the commune argue wildly about the philosophical implications of the dialectic, etc. etc. Some of this is meant to show us that there was a lot of talk during the Viet Nam period, even though there was a lot of action, too, some of it ugly and violent. Listening to this book has gotten me to rent the DVD of Sayles's Eight Men Out, the story of the Black Sox scandal. Sayles also made a movie called Matewan, about the mines and the miners, the unions and the corporate fat cats. I am drawn to Sayles's writing, but I am magnetically drawn to Balerini's narrations. He is a masterful performer. I just can't imagine your not enjoying his amazing talents.

Absolutely. It's a richly layered look into fractured relationships, within a family and within a nation. Sayles does an excellent job creating deeply resonant characters, foregoing stereotypes with his portrayal of coal miners, somehow vivid in their despair. Equally, he balances the righteous fervor of young activists with the inevitable internecine cynicism. Even the police, with their broad accents and easy comfort with racism and misogyny, are far more nuanced than typically portrayed.

It's easy to say Hobie, so I will. But I think it's mostly due to the scene in which, in order to feel a part of a new circle of friends in Boston, he recounts a story from home in West Virginia. The characters and story are very familiar to anyone who's seen Sayles' film Matewan.

Which character – as performed by Edoardo Ballerini – was your favorite?

All were great. It's rare that a book with so many characters with so many distinct voices is done well. This one is very well done. Ballerini is masterful.

If you could rename Union Dues, what would you call it?

Union Dues works perfectly, on a number of levels, as it was meant to do.

I was attracted by the prospect of a novel by John Sayles, as he is one of my favorite film directors. But I hesitated because of the summary, it didn't grab me at first. In fact, it turns out to be very accurate and precise. Yet in retrospect, somehow I feel the story was more abstract than what the two paragraphs described. A very pleasurable experience overall.

What made the experience of listening to Union Dues the most enjoyable?

The characters are living and breathing showing all the nuance of the world Sayles invokes.