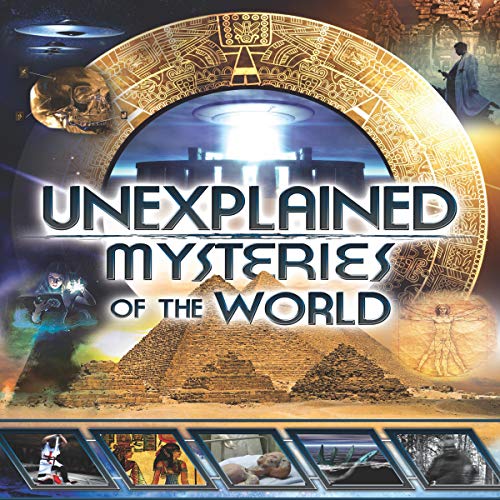 Unexplained Mysteries of the World

Delve deep into seven of the biggest religious, historical, and esoteric mysteries of all time. Discover where we really come from, the facts behind the Ark of the Covenant, experience people who've had Bigfoot encounters, learn about crop circles, and much more. This extensive audiobook takes an in depth look into people, places, and things that have remained mysteries for centuries.

Egypt Unveiled: Robert Bauval is an international best-selling author whose discovery about the pyramid complex at Giza (called the Orion Correlation) shook the foundation of Egyptology. Hear startling new evidence regarding the very origins of civilization.

Rosslyn Chapel: New evidence suggests that there is a shocking secret hidden beneath the floor of Scotland's legendary Rosslyn Chapel, which may open a gateway to another world.

The Occult: Is the occult truly synonymous with demonic possession and satanic worship, or is it an empowering practice that predates history? Discover the secret and enter the world of Magick to unlock the key to your personal path.

Crop Circles: Explore legendary sacred sites such as Silbury Hill and Avebury. Listen to tales of massive circles forming in minutes before eyewitnesses and learn the theories behind this enigma of the circles.

Bigfoot in America: Join a team of special investigators as they uncover new Bigfoot witnesses and historical tales. Journey with them into the dark woods of the Frazier Land and witness amazing paranormal and often terrifying events.

Over seven hours of unexplained mysteries and paranormal research!

What listeners say about Unexplained Mysteries of the World

I enjoyed the chapters on Egypt, Rosslyn Chapel and Bigfoot but really struggled to get to the end of this book. The sound quality was poor in some sections, almost as if it had been recorded from a tv series from the other side of the room (sure it wasn't but that's what it sounded like). Then loud heavy metal music and other random genres were overlaid and it was really hard to hear what was being said. There was one section where it felt like I was listening to full-on five minutes of heavy metal. Really felt like padding. So interesting stories but be prepared for the unusual and very distracting use of music!

The subjects were very interesting, but the background music was so invasive. Heavy metal music is completely inappropriate for the subject. I'm afraid it spoiled listening to the book.