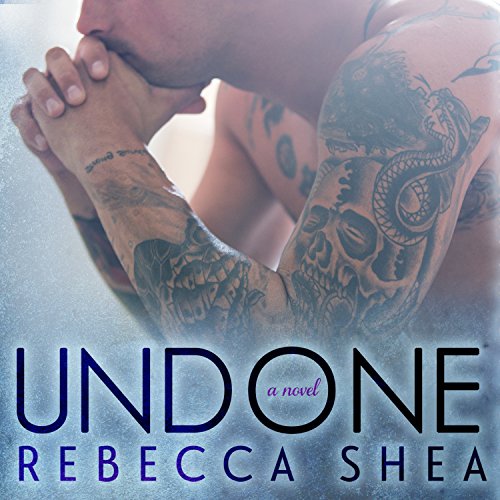 I've found it's easy to share my body but not my soul. I need no one, yet I crave her. Self-assured and independent, she doesn't need me, but she wants me, and undeniably I want her too. At war with myself as I battle the secrets of my past, I don't know if I can allow her to see the darkest parts of me, the parts I've left untouched - undone. As she chips away at the walls I've built for years, I fear those secrets will hold me hostage from love forever.

What listeners say about Undone

Much better then book 1

If you could sum up Undone in three words, what would they be?

What other book might you compare Undone to and why?

This is a great book. Book 1 was good but this one was so raw and emotional. I didn’t want to put this down. We are introduced to Landon in book one. He’s a bad boy unwilling to settle down. We learn so much about his past in this book and it’s heartbreaking and really sad for lack of better words. The childhood abuse he suffered was difficult to listen to and the narrator did a great job portraying his agony through his tone. Landon falls in love with Regan but his past has made him afraid to love and commit to anyone and he continuously pushes her away. Regan is a strong, intelligent woman that isn’t looking for a man to rescue to her unlike the main character in book 1, which I love. This book is filled with drama but it’s nothing too unbelievable and I highly recommend it.

What aspect of Amy Landon and Zach Villa ’s performance would you have changed?

Zach has the same issue I’ve found with all male narrators portraying a southern female, it’s terrible! When I say terrible I don’t mean you can’t stand to listen to it but it just sounds like ridiculous to me. It really isn’t that big of a deal though. Zach did an awesome job, I could feel the rage Landon experienced through Zach's narration.

Yes, but discussing it would give too much of the story away.

Although this is book 2 you won't miss anything crucial if you don't read the first book.

Love story between Landon and Reagan.Many twist and turns about love ..trust ..truth between 2 people. To let the past be forgiven and forge on to new beginnings. It. All boils down to LOVE ❤️.

I love the story. I listened to it every fee second I had. very sexy.

Phewee, you'll really go through a spectrum of emotions with this one as one after another of highs and lows are felt during this listen.... the sweet initial romantic chase, the all too brief happiness of the capture and the sorrow as the H/H's devastating tragic histories are slowly and painfully revealed. And there's more heartache to come for them before you get to the final HEA chapter.

Landon, the drool-worthy Cop, is emotionally shut off and only sleeps with a woman once but when he sets eyes on Reagan one night he knew he had to have her but he didn't realise what an impact she would have on his 'no commitment' life. Reagan is a successful Doctor and wasn't prepared to be swept off her feet by the gorgeous but emotionally damaged Landon but she hoped she could be the one to finally break through all his defences so she gave it her best shot. Romance, denial, sex, passion, tears, regret, heartache and, in the end, a beautiful love story together with some great characters are all intertwined in this well-written and descriptive plot.

Worth a credit? This is a story of unconditional love, overcoming heartache and with trust, forgiveness and love the future can be yours to choose. I spent a very lazy Sunday hooked on this enjoyable emotional roller-coaster and, YES, totally credit-worthy.

Not sure. The storyline was okay, albeit so predictable. Always love an alpha male but got really frustrated with Reagan.

Would you be willing to try another book from Rebecca Shea? Why or why not?

Yes. Although probably not on my top 50 listen list.

Amy Landon did an okay job, she didn't keep me from listening as some female narrators will do, but Zach Villa was amazing, sexy, and his female voice was better than AL's male voice.

Storyline was really rushed and predictable; hope Ms. Shea does a better job with the next book.