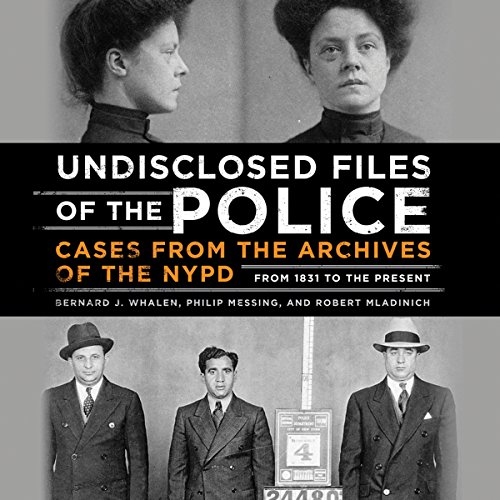 Undisclosed Files of the Police

More than 175 years of true crimes culled from the city's police blotter, told through an insightful text by two NYPD officers and a NYC crime reporter.

From atrocities that occurred before the establishment of New York's police force in 1845 through the terrorist attack on the World Trade Center in 2001 to the present day, this audio is an insider's look at more than 80 real-life crimes that shocked the nation, from arson to gangland murders, robberies, serial killers, bombings, and kidnappings, including:

Perfect for crime buffs, urban historians, and fans of Serial and Making of a Murderer, this riveting collection details New York's most startling and unsettling crimes through behind-the-scenes analysis of investigations.

" Undisclosed Files of the Police has something for every crime aficionado, from Mafia buffs to those who are captivated by headline grabbing trials." (Anthony M. DeStefano, Newsday)
"An extensive buffet of New York City's real crime history, served up in spicy bite-sized portions." (Raymond W. Kelly, former NYC police commissioner)
"New York characters galore, both good guys and gangsters, leap from the pages of Undisclosed Files of the Police." (Sam Roberts, The New York Times )

What listeners say about Undisclosed Files of the Police

Extremely enjoyable, if these things can be, only gripe would be it runs out of interesting cases after Son of Sam.
Worth a punt

Good History of Crime in NYC

Short stories of NYC crime that the NYPD was involved in/investigated etc. From old crimes to more recent. I was worried this was just going to be a NYPD praise book but that's not the case. Very impartial and worth the read. I enjoyed it. Very dark though at times but that is crime I suppose.

Fascinating exploration of the history of NYPD and its famous cases. A real page turner.

Great for listening in small bits

Would you listen to Undisclosed Files of the Police again? Why?

This audiobook is perfect for people who like to listen in small bits - on the treadmill, while doing dishes, etc. Each story is self-contained and gripping enough to get you through a few minutes of doing something else that's not that fun.

Some obvious audio editing problems - the sound fades in and out at times, and you can definitely hear where pick-ups were inserted. Doesn't distract too much.

Excellent book and great narration. It’s a work that will be thoroughly appreciated by any fans of true crime books.

Not done reading it...
Very interesting,good for history bluffs
I definitely would recommend this ebook,just got hardcover book & softcover book, Intriguing...

So many crimes I've nrever heard about and a refresher on those I've forgotten. The reports of
19th to mid 20th century held the most interest. I'd like to see a 2nd volume, this time reading the
old police reports of "everyday crimes, deaths, accidents, fights"
the newspaper archives spell out.

If you like true crime you will probably enjoy this book. The stories move quickly and don’t waste a lot of time on irrelevant details.

Have you listened to any of Peter Ganim’s other performances before? How does this one compare?

This is my first audable book with Peter Ganim, he was easy to understand and follow throughout the book.

I was fascinated by the amount of data available in some of these very old cases.

If you are familiar with NYC you will get more out of the stories. I have never been there so I had difficulty putting relevance to specific areas mentioned.

The tales in this book are definitely biased, but still entertaining. The voice acting was a touch melodramatic and campy at times, but it was still a decent listen.

Fast moving and factually accurate. Also, not for your minds due to disturbing details.
J ferguson