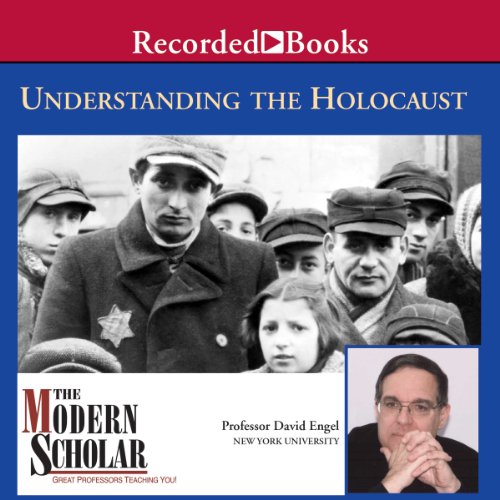 In Understanding the Holocaust, Professor David Engel of New York University examines the encounter between Germany's Third Reich and the Jews of the 20 European countries that fell under Nazi domination between 1933 and 1945.

The results of this encounter stretch human comprehension to the limit and raise frightening questions about the human condition. When it was over, two-thirds of Europe's Jews, some 5.8 million people, had died - and their deaths had occurred amid the most gruesome of circumstances.

Engel explores the reasons behind the Holocaust and attempts to enter into the minds of the participants. From the origins of the idea behind the killing campaign to the notions of modernity that many blame for creating the possibility for such a happening, Engel offers an illuminating analysis of the 20th century's great tragedy.

What listeners say about Understanding the Holocaust

Engel approaches a well documented episode in history from a unique angle with very interesting results.

course was well thought out and delivered.

I do not like the category of performance. when dealing with socio-historical issues. the speaker isn't performing he is delivering a lecture. prof. engel's lecture was awesome, he left me with much to think about.

Would you consider the audio edition of The Modern Scholar to be better than the print version?

This book is a compelling and though provoking guide to the Holocaust. Helps answer alot of questions like: why? and why didn't they help themselves? and finally how did a group of people get away with mass murder. Listen, you won't be sorry.

I liked it but this is not for people without a knowledge or background in the Holocaust studies. I have taught the Holocaust to HS students for 33 years and this gives me more in the subject to think about but I believe for the average reader this is going to be a siappointment.

As a discussion on the particular concepts and motivations behind the actions of The Second World War, I think this Modern Scholar is particularly insightful.

Whereas there is little or no actual discussion of speciffic incidents or stories, (no gory details) The Speaker does an excelent job in addressing and discussing the speciffics of what made the resultant actions Possible in a 'Modern Society'.

From the original concepts that formed in Hitler's youth that enabled the relegation of an entire peoples to a status that would necessitate extermination, to the design and structure of the death systems used to enact that 'Solution', to the perceptions of the Jews themselves to be led into a death system... this Modern Scholar delves more deeply into the mechanics and systems which made the tragedy and zealotry of the Holocaust a reality than other accounts I've read.

While I fould this approach vastly different and uniquely insightful, I did find the overal coverage a bit shorter than I had expected, and Over before I had anticipated.

With such a unique approach to the thing, I had rather wished it could have gone on a bit longer or indeed covered more areas of The War than it did... tho it does cover speciffically 'the Holocaust' in its technical entirety.
Still, in such a global incident, I'd liked to have heard more...

After a while, the speaker's rhythms and forms of speech can also get a bit wearing... The speaker tends to fall into a jaunting and rather repetative diction which often had me wishing he'd just Spit It Out already... a subtle nuance of rhythm and use of terms that perhaps that wouldn't be noticable to everyone, but one I fould tiring...

Overall, I'd say this is one of the better Modern Scholars I've read. It is inciteful and interesting... not perfect, but worth the time and money... and that's not a bad thing.

David Engels speaks way too slow. It sounds as if he's improvising in a lecture hall rather than reading from script. So far I've only listened two the first two hours but it's almost unbearable with that slowness and the little facts he presents, and when he finally says something it's repeated over and over again... like a mantra.

This is an audiobook for stupid people that don't know anything at all about the Holocaust.