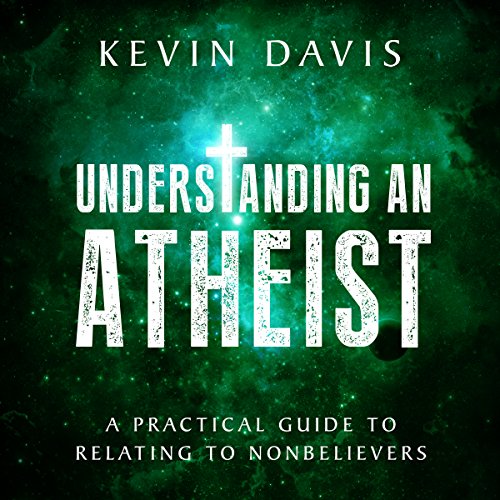 A Practical Guide to Relating to Nonbelievers
By: Kevin Davis
Narrated by: Rich Miller
Length: 1 hr and 50 mins
Categories: Religion & Spirituality, Non-fiction
5 out of 5 stars 5.0 (1 rating)

Everyone knows an atheist. You may not know it, but you do. Many atheists are closeted because of the social and familial stigma that comes with being an open atheist in a society full of religious believers. Often referred to as the fastest growing demographic in America, those with no religious affiliation make up about 10-15% of the US population. That means it's likely that 1 out of every 10 people you know either doesn't subscribe to an organized religion or doesn't believe in a supreme being at all.

Understanding an Atheist is an audiobook by Kevin Davis, head writer at the popular blog DividedUnderGod.com. This audiobook is for anyone who knows a nonbeliever, whether they're open about their beliefs or not. In it, Kevin takes you through his own experiences, raised Catholic, once devout Christian, then closeted atheist, now openly a nonbeliever and active in the atheist community. Through this journey, listeners will gain an understanding of what it's like for someone to abandon faith in the supernatural and gravitate toward evidence-based reasoning, ultimately facing the taboo of being a nonbeliever.

The purpose of this audiobook is not to tear down religion or the religious, but to bring to light the issues facing your atheist friends and family. If you have a friend or family member who is an atheist you might have thought:

Understanding an Atheist will attempt to answer these questions for you, by giving you some insight into how the mind of an atheist operates, what they stand for, what prejudices they face, and how they feel, surrounded by religion every day.

The book was instructive in laying out what it means, and almost more importantly, what it does NOT mean to be an atheist.

I liked being introduced to the concept of a "Progressive Atheist".