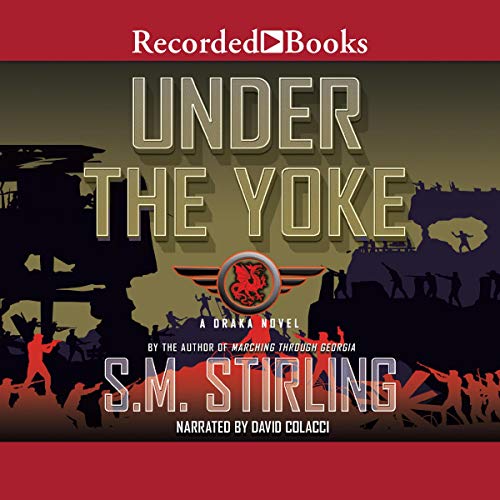 In Under the Yoke, S.M. Stirling traces the rise of the Domination of the Draka and its long struggle with the United States and the American-led Alliance for Democracy. In this alternate history, the Americans who reject the Revolution did not scatter to the four winds and Canada; a slight change in the course of events brought them to the new Crown Colony of Drakia instead - starting with the Cape of Good Hope and soon encompassing the whole of the right subcontinent of Southern Africa. Soon burning resentment and limitless ambition spurred the expansion of the people who called themselves the Draka.

What listeners say about Under the Yoke

I quite liked the audible version of the first Draka book, "Marching Through Georgia". This book retains the narrator, and he continues to do a completely fine job. Not amazing, but quite good. My only complaint is that this audiobook appears to be based not off the original print version, but rather off the slightly abridged version of this story that appeared in the collection "The Domination".

The original print versions of the Draka books would typically begin each chapter with a brief excerpt from an in-universe book, and would include an extensive appendix, both of which served to provide additional background information and worldbuilding that's usually helpful in establishing the timeline of an alternate history work. These sections added up to about 30 pages of the original paperback. They were removed when the Draka books were collected in "The Domination", but since they were included in the audible version of the first book in the series, "Marching Through Georgia", I had assumed they would continue to do so for "Under the Yoke". But this appears not to be the case. The story is entirely comprehensible without them, but they definitely add to the experience.

Exactly what I expected. Gritty, Terrible, but satisfying. It's not always what you want, but what you need in a book.

Step down from its predecessor.

Basically a spy thriller but with a fixation on sex. Not uncommon for the genre but the author over did it. Would have preferred exploring the resistance movements across Europe in more detail.