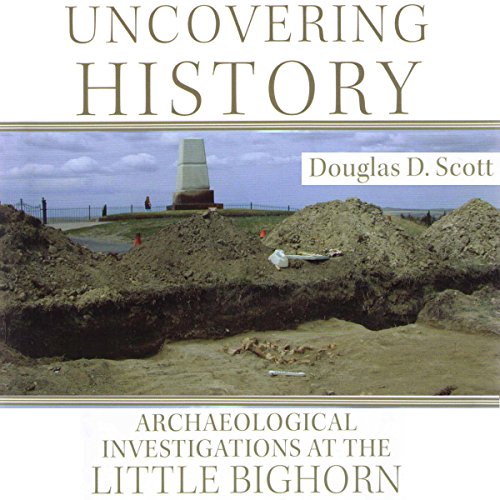 By: Douglas D. Scott
Narrated by: Gary Roelofs
Try for £0.00

Almost as soon as the last shot was fired in the Battle of the Little Bighorn, the battlefield became an archaeological site. For many years afterward, as fascination with the famed 1876 fight intensified, visitors to the area scavenged the many relics left behind. It took decades, however, before researchers began to tease information from the battle's debris - and the new field of battlefield archaeology began to emerge. In Uncovering History, renowned archaeologist Douglas D. Scott offers a comprehensive account of investigations at the Little Bighorn, from the earliest collecting efforts to early-twentieth-century findings.

Scott describes how detailed analysis of specific detritus at the Little Bighorn - such as cartridge cases, fragments of camping equipment and clothing, and skeletal remains - have allowed researchers to reconstruct and reinterpret the history of the conflict.

Scott expands our understanding of the battle, its protagonists, and the enduring legacy of the battlefield as a national memorial.

"A masterful overview of more than a century of collecting and excavating at this captivating place… For the archaeological component, Uncovering History is the indispensable key." (Paul L. Hedren, author of After Custer: Loss and Transformation in Sioux Country)
"Scott's unprecedented approach to battlefield archaeology, using forensic science techniques, has resulted in startlingly fresh interpretations of the Battle of the Little Bighorn." (Douglas C. McChristian, author of The U.S. Army in the West, 1870–1880)
" Uncovering History is a milestone in the archaeology of the Little Bighorn and will quickly become a standard historical and interpretive reference." (Jerome A. Greene, author of Stricken Field: The Little Bighorn since 1876)

What listeners say about Uncovering History