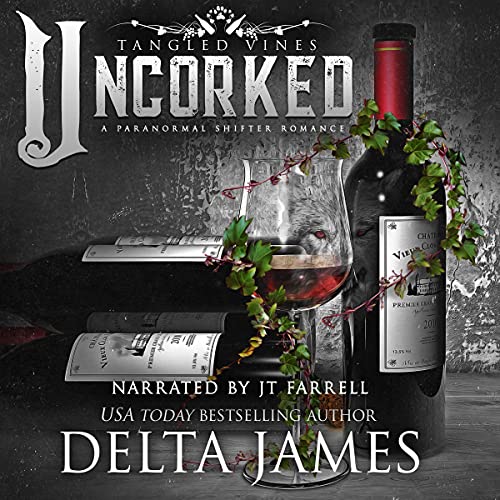 When Hunters strike at the wrong prey, Damian Steele will stop at nothing to claim the ultimate prize... his fated mate.

On the backroads of Italy, a fatal accident takes the lives of three of the four people in the car. The only survivor is an unconscious Kinzie Edwards, who is mistakenly identified as her twin sister. In a targeted act of violence, Kinzie loses her sister, Kayla, and her humanity.

Damian is the brooding Alpha of the Sonoma Pack and the head of the Luna de Lobo Vineyard on the California coast. When Hunters strike at his people, Damian rushes to Italy to care for the mate to his omega. Except it isn't Kayla he brings home.

While Kinzie hovers between life and death, a powerful change within her DNA occurs and she wakes as a wolf. Kinzie knows nothing about wolf-shifters or fated mates, unlike her sister who had been a wolf-shifter.

Thirsting for answers and revenge, Kinzie leaves the safety of Damian's embrace to confront those who murdered her sister. Can Damian reach her before the Hunters claim her as another trophy?

Publisher note: Uncorked is a paranormal, supernatural story with steamy heat in and out of the bedroom for mature readers only.

What listeners say about Uncorked

I really enjoyed this book. With likeable characters and a very confident Alpha, it’s a great combination. A good performance from JT.

I always know with a Delta book I’m getting an amazingly dominant male and a female strong enough to put up with him and each time I’m always shocked at how well she manages to write the characters this one is no different. Well developed storyline’s and characters and an appropriate pace is always delivered while listening to a Delta book

I was very lucky to have read/listened to Uncorked immediately after Corked. I was 'hooked' by Corked and reeled in by Uncorked! Delta James you are a gifted storyteller. Thank you. I am excitedly waiting for the next installment of the wonderful series!
If you love love love Fiercely Independent Women and Strong Dominant Males, this was written just for you!
I cant wait for the 3rd book continuing the over arching story. Each book is a standalone, but reading them in order greatly enhances your reading pleasure!

As always, Ms. James wrote a great story. I found both main characters likeable. A car accident, orchestrated by hunters, severely injured Kinsey and kills her twin sister Kayla and Evan, her mate. Damien, former navy seal, now alpha and head of Luna de Lobo vineyard, is pulled to be with her. He thought she was Kayla and his fated mate because Evan was dead and the female could possibly have another mate. The pack also thinks Kinsey is Kayla. When Evan knew Kayla was already dead, he tried to save Kinsey by starting the change. When Kinsey woke up, she was a piece of work. She eventually escapes from Damien and returns to Paris, where she lived. She had a life in Paris, a nice but small apartment, a lover, and friends. Of course, trouble is on the horizon and Damien will not stop searching until he finds her. Italian alpha Marco and his mate Catherine were in this book. His resources were at Damien's disposal. This book was so good. JT Farrell, as always, did an awesome job with the narration. I received this free copy audiobook at my request and have voluntarily left this review.

Delta James + JT Farrell is always a great listen.
You just know he reads it the way she wrote it. And it sounds like it happened. And I wish I was there. Love the new Tangled Vines Series.

Another Fabulous Story in the Series

Danger and Intrigue here. the "Hunters" strike, and the wolves must regroup.

A humorous case of mistaken identity. All the growly alpha wolves, and feisty females we could want.
The more I read the more I enjoy.

Must listen to audiobook

Delta James has never let me down. This story has explosive love scenes, hunters wanting to kill shifters, murders, intrigue, mystery, and a woman having trouble facing a new way of life, Kinzie is finding it difficult to face the life of being a shifter and Damian claiming to be her fated mate so she leaves safety and takes off on her own to find answers. This will be a dangerous journey, but she will meet wise friends along the way and also Damian will be tracking her. I must admit that one of the Hunters shocked me. JT Farrell is a narrator that will bring the listener right into the action, and make you feel the emotions of these characters. I highly recommend this Audible book. I know that a series is fantastic when I can't wait for the next book.

First I have to say I love when Delta James lets loose and lets it all fly out the window when she writes because the results are stunning I'm hooked to this new series.
This story is about Damian,Kinzie I loved these guys they were very entertaining This story had everything you could possibly want . Bravo Delta you've done it again.
Narrated by: JT Farrell we can't forget about JT he this fabulous i love how he brings the story to life all the different voices he makes for each character he is so talented .